Apple has added a new iMovie Theater channel to the Apple TV, designed to work in conjunction with the iMovie Theater feature that was added to both the iOS and Mac versions of iMovie in today’s update.

iMovie Theater is a cross device feature designed to allow users to watch shared clips, movies, and trailers on all Apple devices, including the Apple TV. Projects that are created within iMovie for iOS or Mac and shared using iTunes Theater within those apps will automatically show up within the Apple TV channel. 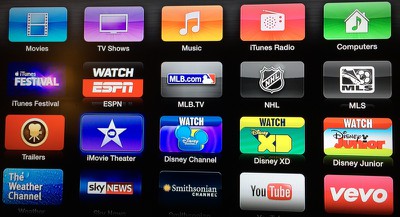 The channel is activated by signing into an iCloud account that is connected to an iOS or Mac version of iMovie. It is available through an over-the-air update and should be available for users running the most recent Apple TV software. Apple also bundled a number of other new features into its iMovie update, which is available for download today.

iMovie for Mac and iOS have been redesigned to make it easier than ever to browse your video library and instantly share your favorite moments. iMovie for Mac includes simplified editing tools that let you quickly improve the look of your movie, add fun effects, and speed up or slow down your video.

iMovie for iOS brings desktop-class moviemaking to your iPhone® and iPad, so you can create split screen and picture-in-picture effects or advanced audio edits in just a few taps. And with iMovie Theater, you can watch your shared clips, movies, and trailers on all your Apple devices, even your Apple TV®.

TsMkLg068426
Nice now if we could only get Amazon Prime ;)
Score: 4 Votes (Like | Disagree)
Read All Comments

Thursday August 6, 2020 8:13 am PDT by Hartley Charlton
An image supposedly of an iPhone 12 display unit has been shared online by leaker "Twitter user Mr. White". Compared to images of an iPhone 11 Pro display piece, this new unit has a reoriented display connector, reaching up from the bottom of the display, rather than from the left-hand side on iPhone 11 Pro. This may be due to the logic board moving to the other side of the device. A...
Read Full Article • 60 comments

Wednesday August 5, 2020 12:56 pm PDT by Joe Rossignol
One of the biggest new features of iOS 14 is Home Screen widgets, which provide information from apps at a glance. The widgets can be pinned to the Home Screen in various spots and sizes, allowing for many different layouts. When the iOS 14 beta was first released in June, widgets were limited to Apple's own apps like Calendar and Weather, but several third-party developers have begun to test ...
Read Full Article • 33 comments

Thursday August 6, 2020 10:05 am PDT by Juli Clover
Apple today seeded new public betas of upcoming iOS 14 and iPadOS 14 updates to its public beta testing group. Today's software releases, which Apple labels as fourth betas to keep them in line with developer betas, are actually the third betas that Apple has provided and they come two weeks after the prior beta releases. Public beta testers who have signed up for Apple's beta testing...
Read Full Article • 95 comments

Saturday August 8, 2020 11:09 am PDT by Hartley Charlton
Apple is taking legal action against the developers of the app "Prepear" due to its logo, according to iPhone in Canada. Prepear is an app that helps users discover recipes, plan meals, make lists, and arrange grocery deliveries. The app is a spinoff of "Super Healthy Kids," and the founders claim that they are facing litigation from Apple. Apple reportedly takes issue with Prepear's logo, ...
Read Full Article • 290 comments

Wednesday August 5, 2020 1:45 pm PDT by Juli Clover
Google this week launched its newest smartphone, the $349 Pixel 4a, a low-cost device that's designed to compete with other affordable devices like Apple's iPhone SE. We picked up one of the new Pixel 4a smartphones and thought we'd check it out to see how it measures up to the iPhone SE, given that the two devices have such similar price points. Subscribe to the MacRumors YouTube channel ...
Read Full Article • 140 comments

Thursday August 6, 2020 7:16 am PDT by Hartley Charlton
Benchmarks from the new 2020 iMac have today been shared online by Mac Otakara. The Geekbench benchmarks are from the newly-released 27-inch iMac with 3.0GHz Intel Core i5 processor and Radeon Pro 5300 graphics, compared to multiple specs of the previous 2019 iMac. The lowest spec 27-inch i5 iMac from 2020 performs about 20 percent better in multicore than the lowest spec 27-inch i5...
Read Full Article • 117 comments

Friday August 7, 2020 7:46 am PDT by Joe Rossignol
Following a report from German blog iFun.de that claimed the new 27-inch iMac's flash storage is soldered to the logic board, MacRumors has obtained additional information in an internal document for Apple technicians. In the document, Apple says that the flash storage is indeed affixed to the logic board and cannot be removed. However, for the 4TB and 8TB configurations, Apple says that a...
Read Full Article • 207 comments

Thursday August 6, 2020 1:06 pm PDT by Juli Clover
Microsoft's "Project xCloud" streaming game service that pairs with its Xbox Game Pass won't be available on iPhone and iPad when it launches this September, and Apple's App Store restrictions are to blame. Xbox Game Pass and its accompanying xCloud streaming feature offer access to hundreds of games that can be streamed to mobile devices, and Apple says that because it can't review each...
Read Full Article • 493 comments

Wednesday August 5, 2020 10:07 am PDT by Juli Clover
Samsung today held a virtual Galaxy Unpacked event where it unveiled its next-generation smartphones that will compete with Apple's 2020 iPhone lineup, set to come out in the fall. Samsung announced the launch of the Galaxy Note 20 and the Galaxy Note 20 Ultra, the two newest devices in the Note lineup, and, more notably, the Galaxy Z Fold 2, Samsung's latest foldable smartphone. The...
Read Full Article • 214 comments