First introduced at WWDC, Anki's iOS-controlled AI-based racing game is set to debut later this month. Unlike standard racing toys, Anki Drive is largely self-operating and is described by the company as a "video game in the real world." The concept is similar to slot car racing, with added enhancements that include artificial intelligence, machine learning, and smartphone-based controls.


The Anki cars are placed on a specially designed vinyl track and connect to an iPhone with Bluetooth-LE. Using software and tiny cameras, the cars calibrate their positions on the track and handle steering on their own. Players control the gas and the guns using an iPhone and the Anki Drive app, shooting at other cars on the track to score the highest number of hits. 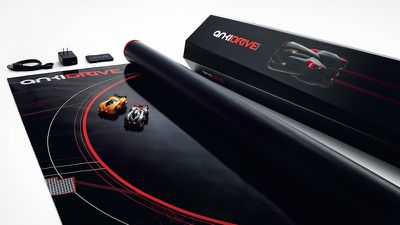 Hits translate to points, and points can be used to both upgrade cars and weapons. Each of the Anki Drive cars has its own unique name, personality, and statistics, with some offering greater acceleration speeds while others have more energy. Engadget went hands-on with the Anki Drive and has a description of the gameplay:

As soon as you're done, you can simply set the cars on the track and away they'll zoom; there's no need for you to hit an accelerate button at all. Indeed, the cars will even know just where to turn. We wanted to see if we could mess it up, so we picked up a car and turned it the other way around to see what would happen. The answer: It just flipped around and went back on the right direction.

So if the cars can drive themselves, what do they need you for? Well, you can affect the race by tilting the phone either left or right to force it to make a wider or sharper turn. There are also special weapons you can deploy if you’re in a competition – a couple of starter ones include a tractor beam to slow down an opponent and a gun that you can use to mow them down afterward.

Anki Drive has several different gameplay modes, including a multiplayer mode that allows several players to compete against one another and a single player mode where one of the cars is controlled through AI. Each of the Anki Drive cars has its own name, personality, and statistics, with some offering greater acceleration speeds while others have more energy. No car can be fully upgraded to match the others, which makes each one unique.

Anki Drive will be available in the United States and Canada on Apple’s website and in retail stores beginning on October 23. Each bundle, which includes two cars, chargers, and a race track, retails for $199. Two additional cars can be purchased for $69 each.

The Anki Drive app can be downloaded from the App Store for free. [Direct Link]

pgiguere1
Pretty cool concept but for $200 with only two cars I doubt it will sell well...

At that price as a kid I'd rather have an Xbox 360, PS3 or Nexus 7, which I'd likely use for much longer, not just as a novelty/demoware.
Score: 20 Votes (Like | Disagree)

I keep finding out that I must be different. When I first saw this I thought "it's like my old Tyco slot car set combined with MarioKart!!!!!! Must buy!!! WILL BUY!!! Only $200? I'M IN!! It's a matter of if you want it. There's no purpose. It's for FUN! Apparently some of you don't know what that is. It doesn't cost anymore than a day at a theme park for two. Invite your buddy over, break out the beers and play your new high tech real life video game that relives old times.

A MacBook lover
what's with these comments? What is this, the 1st Gen iPhone launch? I say test out the product and see how it feels first before cracking on the price.
Score: 10 Votes (Like | Disagree)
Read All Comments

Saturday February 4, 2023 10:05 am PST by Eric Slivka
Online retailer TigerDirect has slashed pricing on the M1 iPad Air in several colors, offering the base 64GB configuration for just $313.99 in Purple and Pink. Note: MacRumors is an affiliate partner with TigerDirect. When you click a link and make a purchase, we may receive a small payment, which helps us keep the site running. That's a savings of 48% compared to Apple's normal $599.00...
Read Full Article • 425 comments