Mavericks to Include Support for 'Power Nap' on iMacs

While Apple's Power Nap feature is currently limited to a small selection of MacBook Airs and Retina MacBook Pros, it appears that some iMacs utilizing flash storage or Fusion Drives may be able to take advantage of the technology when Mavericks is released.

First introduced with OS X Mountain Lion, Power Nap is a feature that performs various background functions while a Mac is charging and sleeping. For example, emails and other app updates are able to be downloaded and apps like Reminders, Notes, and Calendar sync. Time Machine backups are also initiated, as is Spotlight indexing.

In the screenshot below, the late 2012 iMac is shown running Power Nap. The model includes a Fusion drive, first introduced alongside the iMac, which combines flash storage with a standard hard drive. 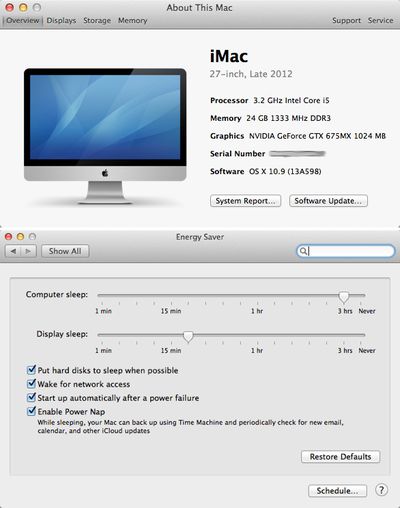 Because it runs in the background, Power Nap requires a solid state drive to function. At this time, it is not clear whether additional products, such as the Mac mini (which also has a Fusion drive option) will be able to access Power Nap as well.

Mavericks also includes a separate feature called App Nap, which is designed to extend battery life when working with multiple apps at one time by limiting power to the apps running in the background.

OS X Mavericks is expected to be launched to the public in late October. The Golden Master, which is the final version of the software that will be provided to the public, was seeded to developers last week.

stukdog
It's nice to see these extra, surprise features that come along. Mavericks also allots more RAM to integrated GPUs (http://blog.macminicolo.net/post/63025919453/mac-minis-gpu-and-a-mavericks-upgrade) on some machines.
Score: 5 Votes (Like | Disagree)

Which would be nice. If power nap ever really worked the way it's supposed to.


And what makes you think it doesn't?
Score: 2 Votes (Like | Disagree)


damnit... BTO? or did u install it urself later?

And yet it's just funny to the death how i can get this same feature on some of the shelf crappy PC for 300 bucks since forever, but of course it's just poor Apple that needs your rationalizations.

kcamfork
Which would be nice. If power nap ever really worked the way it's supposed to.
Score: 1 Votes (Like | Disagree)
Read All Comments

Wednesday January 26, 2022 8:56 am PST by Joe Rossignol
Benchmark results have started to surface for MSI's new GE76 Raider, one of the first laptops to be powered by Intel's new 12th-generation Core i9 processor. Intel previously said that its new high-end Core i9 processor is faster than Apple's M1 Max chip in the 16-inch MacBook Pro and, as noted by Macworld, early Geekbench 5 results do appear to confirm this claim, but there are several...
Read Full Article • 209 comments