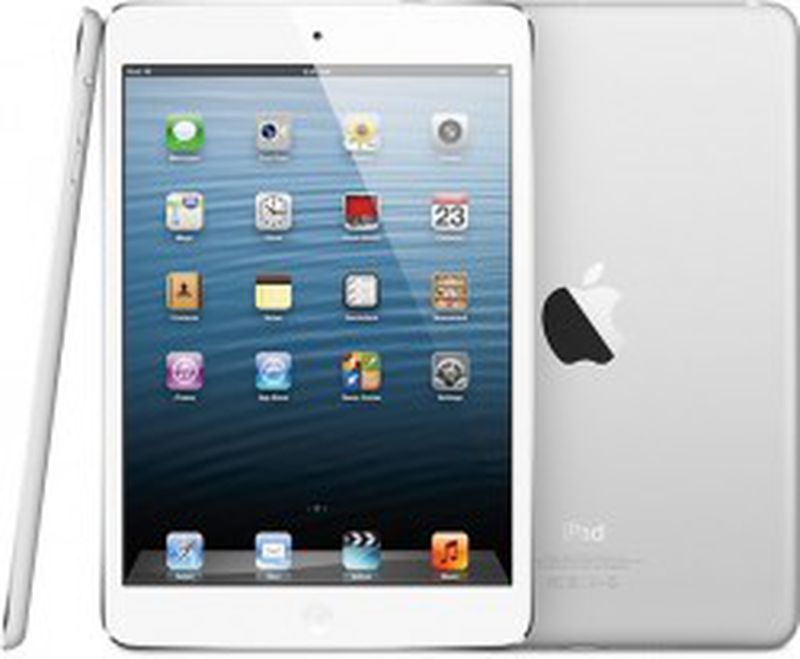 According to market research firm IHS iSuppli (via CNET), production levels for the expected upcoming iPad mini with Retina display indicate that the device may not ship alongside the upcoming iPad 5, which looks to be "on schedule" for an October release. Specifically, it is estimated that Apple's Asia-based supply chain of manufacturers have begun the start of Retina iPad mini display production, but have not entered a mass production stage of the upcoming tablet.

While Apple's iPad 5 looks to be on schedule for an October release, that's not the case for the Retina version of the Mini, according to Rhoda Alexander, director of Tablet and Monitor Research at IHS iSuppli.

"The Retina Mini looks less certain for that time. Manufacturing volumes on that would match better with a Q114 [first quarter 2014] launch," she told CNET.

Though she quickly qualified that saying, "But given that it's Apple, one never knows" -- meaning that Apple could announce a product but not necessarily ship it at the same time as the iPad 5.

The research firm also cites design challenges, stating that a trade-off between the integration of the Retina display and the compact size and exceptional battery life of the iPad mini has become problematic. The claim does conflict with a report from IHS iSuppli last month stating that Retina iPad mini production levels were set to match last year's levels. KGI Securities analyst Ming-Chi Kuo also claimed earlier this month that the Retina iPad mini will indeed make an appearance before the end of the year.

Apple is expected to launch its redesigned iPad and a Retina iPad mini in the near future, perhaps at a media event as soon as next month. The company is also expected to make several updates to its Mac products before the end of the year, and they may make an appearance at that same event.

netnothing
Apple really needs to step up their game in the 7" tablet market. It's almost embarrassing how tablets like the Nexus 7 and Kindle Fire HDX both have gorgeous screens compared to the mini.

AnandTech got 12 hours battery life on the new Nexus 7. Not a valid excuse.


The standard Apple excuses like battery life are quickly being beaten by their competitors. Right now the only thing Apple has to tout is the ecosystem.....which is what we saw in the mini keynote last year. Apps being designed for iPads as opposed to phone apps in Android.

xNYMetsx
Apple's only hurting themselves by not releasing a retina iPad mini. They've had more than a year to figure it out. Pathetic.
Rating: 8 Votes

gibbz
Why do we even listen to analysts anymore? This sounds like someone who is simply talking in broad strokes because they have no idea what is going to happen.
Rating: 8 Votes

I've got to imagine that using a lock passcode on iPads is WAAAY less common than on a phone. Plus with the iPad cover......it bypasses the slide to unlock screen anyway.

Can't see Apple adding Touch ID and then selling an accessory to negate it.


Huh? Smart Cover doesn't unlock your device, it just wakes it from sleep. If you're using a passcode you still have to enter it.
Rating: 7 Votes

9to5mac has pictures of the mini with Touch ID (and the champagne color) in today's article, but no mention of retina. I don't believe retina will come on the mini this year. I strongly believe Apple is holding out on that for another year..


Why on earth would Apple add A7/M7, Touch ID and 1GB RAM but no retina? Especially when iOS 7 was designed with retina in mind? And how does it make good business sense to hold out on retina another year when cheaper tablets like the Nexus 7 and Kindle Fire are shipping with retina like displays?
Rating: 7 Votes

I think the other problem in addition to battery life is what resolution to use. If they use another unique one then it may require additional work from developers


AnandTech got 12 hours battery life on the new Nexus 7. Not a valid excuse.
Rating: 6 Votes

newyorksole
Apple would be wise to release a Retina mini alongside iPad 5 next month, IMO.
Rating: 6 Votes

Right on the 64 by part but functional fingerprint scanners isn't new.

Motorola did it years ago


He said "truly functional". Could you really say that about the Atrix?
Rating: 5 Votes

I posted a week or so back that I was trying to decide between the N7 and the new Mini. I would really like to get one of those for Xmas. I should say I will be getting one of those. If the Mini is retina the decision is made for me. If it's not, the decision is still made... N7.

I can't think of 1 valid excuse for the Mini not being retina.
Rating: 4 Votes
[ Read All Comments ]