Apple today added a new page to its website featuring reviews of the new iPhone 5s and iPhone 5c from a number of prominent publications and sites. Carrying the tagline "It seems we've given people a lot to talk about," the review page is currently being featured on Apple's main iPhone page. 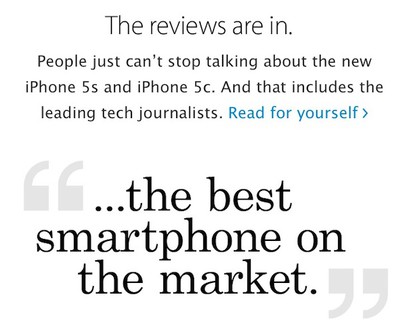 The feature page contains quotes from and links to reviews from The Wall Street Journal, The New York Times, Time, CNET, USA Today, Esquire, Engadget, Daring Fireball, AnandTech, and TechCrunch. Most of the quoted and linked reviews cover the iPhone 5s, although several address the lower-cost iPhone 5c as well.

Most of those reviews for the iPhone 5s and iPhone 5c were published on Tuesday, September 17, several days before the devices launched to the public. Apple introduced the devices at a September 10 media event, and provided review units to several publications in advance of the public release, allowing them to publish their reviews in a coordinated release late on the 17th.

Klae17
Where are the naysayers now?

Where are the naysayers now?

Alumeenium
and $100 cheaper it would have been "The ONLY Smartphone" because it OWNS the market... too bad they priced it like an iPhone LISA
Score: 10 Votes (Like | Disagree)

and $100 cheaper it would have been "The ONLY Smartphone" because it OWNS the market... too bad they priced it like an iPhone LISA

JGowan
None of glorious reviews matter because all of those "news sources" are in Apple's pocket.