First iPhone 5c Reviews: Color is a 'Breath of Fresh Air', Will 'Sell Like Hot Cakes'

During its iPhone event that took place on September 10, Apple handed out a number of iPhone 5c review units to various publications. The embargo on reviews has just been lifted, which means a slew of sites are posting reactions to Apple’s colorful new phone lineup. We’ve gathered some interesting excerpts below to highlight the general reaction to the release. 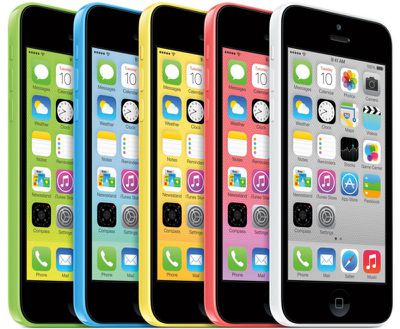 The budget model, the new iPhone 5C, comes in five colors ($100 for the 16-gigabyte model with a two-year contract, $550 without). It’s essentially identical to last year’s iPhone 5, except that its back and sides are a single piece of plastic instead of metal and glass.Actually, “plastic” isn’t quite fair. The 5C’s case is polycarbonate, lacquered like a glossy piano. Better yet, its back edges are curved for the first time since the iPhones of 2008. You can tell by touch which way it’s facing in your pocket.

It’s a terrific phone. The price is right. It will sell like hot cakes; the new iPhones go on sale Friday. But just sheathing last year’s phone in shiny plastic isn’t a stunning advance.

There is absolutely no give to this phone at all. It doesn’t bend or buckle anywhere in the casing, which is what you want, obviously. It feels as solid as the 5s.

The iPhone 5c doesn’t actually feel like plastic. It’s strange when you first pick it up, but it almost feels like ceramic or a similar material that is glossy and hard. The manufacturing process that Apple used to make this phone and the metal reinforcement it used in the plastic casing certainly worked on making this phone tough.

To date, Apple’s choice of materials has been one of its prime differentiating factors, at least from an aesthetics point of view, vs. the Android crop of competitors. So does dipping back into a polycarbonate shell threaten the image Apple has tried so hard to cultivate?

The answer is a resounding ‘No.’ Apple notes that the iPhone 5c is actually polycarbonate because it wanted to get the colors just right, and doing so in metal just wasn’t feasible. Further, it points out that there’s a steel frame (which doubles as an antenna) girding that polycarbonate shell, which results in a phone that feels sturdy in the hand, without the flex or perceived fragility of other plastic device designs.

The iPhone 5C has the same A6 processor and the same 4-inch Retina display as the iPhone 5. Colors on the 5C’s display look warmer.

It’s just slightly thicker and heavier than the iPhone 5. And while the 5C isn’t as refined-looking as the iPhone 5 or the new 5S, it isn’t a tacky plastic phone, either. I’ve tested plastic phones before, including the Samsung Galaxy S4 and the new Moto X from Motorola, and this phone feels more solid in the hand.

We’re not going to lie. The iPhone 5c is gorgeous – we’d even argue that it’s the most beautiful iPhone since the 4 and 4s. It instantly makes the iPhone 5 and 5s look staid in comparison.

Sure, we prefer materials like aluminum and glass over plastic, and we appreciate the intricate craftsmanship that goes into building the iPhone 5 and 5s, but still, we can’t help it – the 5c just triggers some reptilian part of our brains that screams, “OMG, color!”

Apple’s iPhone 5c is currently available for pre-order and will begin shipping on September 20.

no one said that.. or at least what the majority of people tried to say is that if the price was lower they would sell much more phones and actually get a larger market share (something they definitely won't do with this)

Plenty of people said it would flop. I've read that word numerous times. The marketshare argument itself is stale. Apple's business model works for them, increased market share doesn't necessarily mean increased profit share, yet Wall Street is always suggesting Apple should change its business model. Apple's model goes against convention, so they simply assume its wrong even though the evidence indicates it's not.

Edit: You're also mistaken if you think this model won't impact market share. Selling like "hot cakes" will certainly do that. Just not as much as a low margin/no profit phone would.
Score: 8 Votes (Like | Disagree)

nagromme
Remember, folks, Apple NEEDS a netbook, and they NEED a $400 phone!* :)

* Which they actually have in China anyway: the iPhone 4.
Score: 7 Votes (Like | Disagree)

But I thought this was supposed to flop???


no one said that.. or at least what the majority of people tried to say is that if the price was lower they would sell much more phones and actually get a larger market share (something they definitely won't do with this)
Score: 6 Votes (Like | Disagree)

no one said that.. or at least what the majority of people tried to say is that if the price was lower they would sell much more phones and actually get a larger market share (something they definitely won't do with this)


It is far to early to start stating what the effect of the iPhone 5c will be in the marketplace. Let's see what happens instead of declaring as fact "something they definitely won't do with this".
Score: 5 Votes (Like | Disagree)