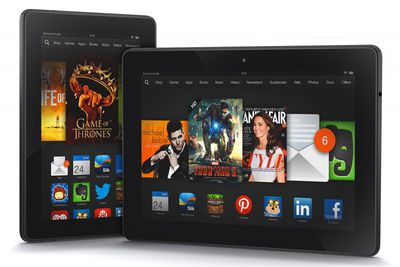 As noted by The Verge, both of the Android-based tablets feature a new quad-core 2.2GHz Snapdragon 800 processor, 2GB of RAM, Dolby Digital Plus audio, a 720p front-facing camera, and a new Adreno 330 GPU, with up to 11 hours of battery life, or an extended 17 hours of battery life for strictly-reading use. Both tablets also feature the new Fire OS 3.0 “Mojito”, and an on-screen “Mayday” button, which enables live on-device tech support. Specifically, the feature allows for an Amazon technical support advisor to walk users through any feature with 24/7 one-way video support, enabling tech agents to draw on the screen and even remote control the device for support purposes.

Finally, Amazon has also updated the 16GB 7-inch Kindle Fire HD with a 1.5GHz dual-core processor and is now selling it at a new lower price of $169, down from the previous price of $199. Like the two higher-end Kindle Fire tablets, the Kindle Fire HD also features the new Fire OS 3.0 Mojito, which contains new features such as multi-tasking, speed enhancements, new content management options, and additional accessibility features. Additionally, a new 8GB model of the Kindle Fire HD is retailing for $139, with both models scheduled to ship on October 2.


It's a competitor to the iPad, so it does have some relevance here. Same reason there's occasionally Microsoft and android news here.
Score: 16 Votes (Like | Disagree)

levitynyc
The cheapest iPod touch is still 229 and a Fire HD is 139.

not the same category, but thats huge for parents who want to buy their kid a small tablet.
Score: 11 Votes (Like | Disagree)


I'm getting tired of people complaining about things like that. It's Apple and competitors news that can be relative to the sales or direction of Apple products.

If Amazon releases a tablet with features or specs to compete with the iPad, it would be useful to know that than just assuming the iPad is the best.
Score: 10 Votes (Like | Disagree)

The fantasy world of apple haters must really be interesting. They've had these fantasies for years and years, yet the real world doesn't match their fantasies.

So Apple's marketshare is increasing?

You can be a fan, and still question's Apple's move in response to shrinking marketshare. Being a fan doesn't mean you have to check your critical thinking abilities at the door.
Score: 8 Votes (Like | Disagree)
Read All Comments