Developer tap tap tap has released Camera+ 4.0, the latest update to its popular photography app. The update features a brand new design that is similar to that of the “flat” design principles found in iOS 7, and also contains new features such as the ability to send photos to apps such as Instagram and Dropbox, as well as AirDrop support and new exposure compensation settings. 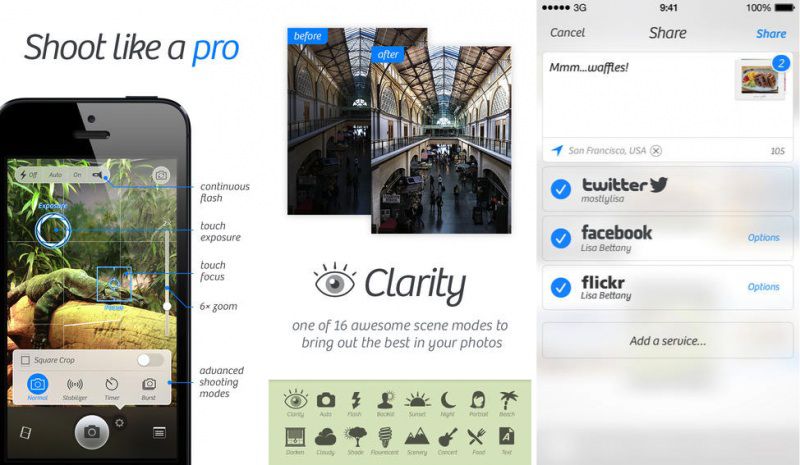 We’ve overhauled the entire Camera+ design and given it a brand new look so it fits-in very nicely with iOS 7.

And we’ve also added a bunch of new and useful things…
- You can now send your photos to other apps like Instagram, Dropbox, and Evernote.
- Exposure compensation while taking photos: adjust for overly dark or bright lighting situations before you even shoot your photos.
- Printing: wirelessly send your photos to your AirPrint printer.
- Square crop in viewfinder enables you to shoot in the popular format without any extra editing steps.
- AirDrop: send your photos to your friends and family with minimal fuss & muss! (iOS 7 only)

In 2012, Camera+ was named the top-selling non-game app of all time for the iPhone as part of Apple’s 25 billion download App Store celebration Camera+ is a $1.99 app for the iPhone and iPad and can be downloaded through the App Store. [Direct Link]

AAPLGeek
While app looks better than before, it feels like they missed the point of iOS7 design. Still too much going on.
Rating: 2 Votes

Funny considering how much taptaptap trash talked iOS7 design when it was launched...


Yes, I think they are being a bit of a hypocrite for trash talking iOS 7 (not constructive criticisms) while updating their app with what amounts to mostly iOS 7 style paint job. At the very least, leave the version number to 3.x or add much needed video recording mode.
Rating: 1 Votes

rockstarjoe
Funny considering how much taptaptap trash talked iOS7 design when it was launched...
Rating: 1 Votes