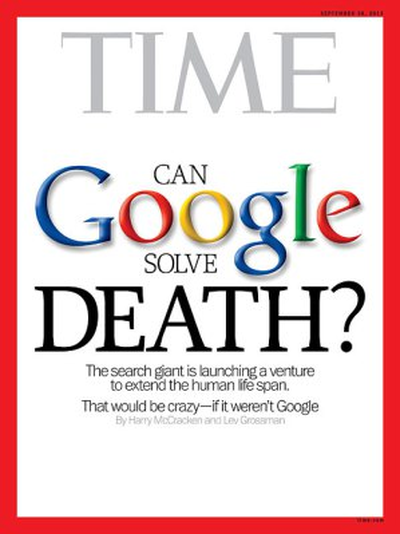 Calico will be helmed by Arthur Levinson, the chairman and former CEO of biotech firm Genentech. Levinson is also a longtime board member and Chairman of Apple, and a director of Hoffmann-La Roche, a Swiss healthcare and pharmaceutical firm.

In a Google press release, Apple CEO Tim Cook spoke about Art Levinson, who will remain on the board at Apple:

Tim Cook, Chief Executive Officer of Apple, said: "For too many of our friends and family, life has been cut short or the quality of their life is too often lacking. Art is one of the crazy ones who thinks it doesn’t have to be this way. There is no one better suited to lead this mission and I am excited to see the results."

Time Magazine will put the new company on its cover next week, under the headline "Can Google Solve Death?"

The magazine spoke to Google CEO and co-founder Larry Page about the venture, which Page hopes can take a moonshot and perhaps solve some major health issues by looking at long-term healthcare R&D that isn't based on quarter-by-quarter profits.

"In some industries, it takes ten or 20 years to go from an idea to something being real. Healthcare is certainly one of those ares," said Page. "Maybe we should shoot for the things that are really, really important so ten or 20 years from now we have those things done."

Calico will be an entirely separate entity from Google, operating outside the Google X research arm that is responsible for Google Glass and the company's self-driving car project.

IJ Reilly
The more I think about this, the more it seems like the creepiest publicity stunt in history.

First, you'd think this was the world's first effort to study age and health issues. Well, hardly. Many not-for-profits have been on this task for decades. Hey, but they're not run by tech geeks, so what do they know?

Second, the founders of Google are billionaires many times over. If they wanted to start a charitable corporation to advance health issues, they could have endowed one, and probably attracted the support of other wealthy benefactors. But instead, they formed it under the Google flag. Chilly, brrr.

Finally, is this a charitable corporation, or what? Are they planning on selling health and longevity, assuming they come up with anything?

The entire thing is bizarre.
Score: 4 Votes (Like | Disagree)

The implications for society of longer lifespans are fairly staggering. Imagine if people have 40, 50 year retirements or longer? Or, would people be able to stay healthy and just work for another 20 years or so. Imagine the implications for the world population?
Score: 3 Votes (Like | Disagree)

MichaelJohnston
Good, I'm glad someone with money is trying to solve this problem. There are plenty of smart people who have the knowledge and desire to work on this type of medicine, but money is always the limiting factor.
Score: 3 Votes (Like | Disagree)

This is no different.

Nothing "wrong" with what Google is doing but it is incredibly naive to think otherwise.
Score: 2 Votes (Like | Disagree)

Oh, really? Not long ago lifespans averaged half as long as they do today. Clean water, sanitation and such are responsible for most of that doubling of lifespans. Sometimes simple little things reduce the death rate and aging of organisms. "Aging" is quite complicated. Perhaps with some other simple things it might again be doubled. I realize there are some people who are bored with life and want to move on but some of us are quite busy and have a lot more to do before we're done. Another thousand years might make a dent in my to-do list...

Hmm... Yet some organisms live for thousands of years and their descendants are also alive.


The upper end of life span is very complex. It's genetically determined and honed through evolution. Maybe we'd live a thousand years if it were hard to get pregnant or live until reproductive age. Clearly not the case with humans. It's all a delicate balance.

Causes of early death are considered disease, some of which you mentioned. This kind of research goes on everywhere, every day. But I doubt this is what these 'researchers' are looking into though. Most likely they want to lengthen life span beyond genetic predetermination because they think they are so important. That's a waste of money.

Aging and death are natural. Everyone and everything that has ever lived and will ever live, will age and die. Aging does not equal disease.
Score: 2 Votes (Like | Disagree)

The more I think about this, the more it seems like the creepiest publicity stunt in history.

First, you'd think this was the world's first effort to study age and health issues. Well, hardly. Many not-for-profits have been on this task for decades. Hey, but they're not run by tech geeks, so what do they know?

Second, the founders of Google are billionaires many times over. If they wanted to start a charitable corporation to advance health issues, they could have endowed one, and probably attracted the support of other wealthy benefactors. But instead, they formed it under the Google flag. Chilly, brrr.

Finally, is this a charitable corporation, or what? Are they planning on selling health and longevity, assuming they come up with anything?

The entire thing is bizarre.