Wednesday September 18, 2013 1:46 pm PDT by Juli Clover
Following the public release of iOS 7, Apple has added a new "Designed for iOS 7" section to its App Store. The section highlights apps that have been updated or released with an iOS 7-style design, including notable offerings like Evernote, OmniFocus 2, and Perfect Weather, a new app released yesterday.

Apps in the section can be organized by name and release date, and there’s also a "Featured" tab that highlights prominent apps like Zillow and NBC. Currently, there are approximately 45 apps in the list, and more will presumably be added as updates from developers go live. We have also created a roundup featuring details on a multitude of iOS 7 app updates. 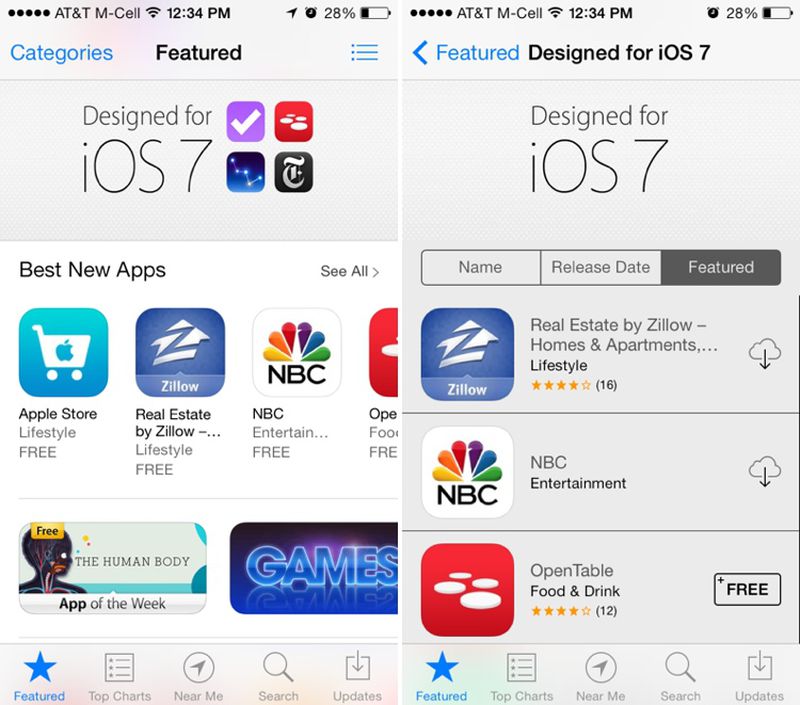 Apple's list of apps that support iOS 7 can be accessed on the front page of the App Store on the iPad or the iPhone and through the iTunes App Store. Apple is also highlighting a number of newly released iOS 7 games, including Angry Birds Star Wars II and Infinity Blade III, which has been optimized for both iOS 7 and the upcoming iPhone 5s.

Though iOS 7 was released this morning, Apple’s servers appear to be overwhelmed, preventing some users from obtaining the update. iOS 7 can be downloaded via iTunes or over-the-air, as detailed in our iOS 7 post.

HelveticaNeue
Too bad Apple doesn't have more of their own apps on that list. They want all the other developers to have theirs ready for iOS 7 and Apple can't even get their own apps ready.
Rating: 7 Votes


These words shouldn't be used in the same sentence. :)
Rating: 3 Votes

What about iBooks! Whatever with iWork, but iBooks---the skeuomorphism seems archaic.


i hope they dont get rid of the page flicking animation/method to turn pages)
thats my favourite part of the app
Rating: 2 Votes

FelixAng
What about iBooks! Whatever with iWork, but iBooks---the skeuomorphism seems archaic.
Rating: 2 Votes

Too bad Apple doesn't have more of their own apps on that list. They want all the other developers to have theirs ready for iOS 7 and Apple can't even get their own apps ready.

perealb
I might update my iPad, but my iPhone, only when jb comes out. :rolleyes:
Rating: 1 Votes

Clubber
I was hoping to see one of mine on the list, alas, I'm too small time.
Rating: 1 Votes

unsynaps
Had no trouble downloading.

jayducharme
I've had a slew of app updates, beginning two days ago. Just got iOS7 without a problem. I think I'm going to like it. I had to change my old wallpaper design; it no longer lined up. I've also discovered that the new folder icons are partially transparent and look terrible with certain backgrounds.

My various screens look really odd now, a mishmash of Apple's new icons and older app icons. I'm sure there will be lots of tweaks coming to straighten things out.
Rating: 1 Votes