Twitter is planning a massive overhaul of its mobile apps, reports AllThingsD. While the redesigned iOS app won’t be launched until sometime after iOS 7 is available, it will include a focus on streams, doing away with the standard menu bar on the bottom of the screen.

Content, including what is found in today’s Home, Connect, Discover, and Me sections, will be organized into streams, which can be navigated by swiping. The Discover section of the app will be eliminated and embedded media will be available in all streams.

There will be a main, reverse-chronological stream like users are currently familiar with, as well as a stream for interactions between other users and conversations they’re having. Notably new, there will also be a stream dedicated entirely to photos shared on Twitter.

Essentially, moving through all the streams will be more of a visual experience, sources said, with a heavier emphasis on multimedia. There won’t be the need, for instance, to click inside a tweet to see a photo or a video — it’ll just appear in the stream. (For reference, see how Twitter’s current “Discover” tab treats some media content.)

The company is also reportedly experimenting with a stream that will display only television-related tweets and conversations, designed to bump up user retention by helping first time Twitter users discover interesting content. In August, Twitter redesigned conversations within its app, adding lines and reordering conversations to make it easier to follow discussions.

Twitter is expected to launch an update for iOS 7 following its release on Wednesday, but the redesigned app will not be released until later this year.

Twitter for iOS is a universal app that can be downloaded from the App Store for free. [Direct Link]

Wow, I am actually surprised these giant corporations are actually copying Jony Ive's design aesthetics. Get it straight through your heads, everyone. Jony Ive is not a UI designer. He doesn't understand the differences between print and digital, and how to use color properly for each medium. If you think a solid color is a vast "improvement" over a subtle gradient, bevel and drop shadow, you got to be out of your mind.

Can't these companies use their own brains and realize that ****ing frosted glass is just plain ugly, let alone terrible for user experience?


Calm down and remind yourself that you don't speak for us.
Score: 5 Votes (Like | Disagree)

So Twitter will look more like a combination of FB and iOS 7. If you can't innovate anymore, copy. FB might as well buy Twitter. Then Apple can buy FB and rename the new services, iFacebook, iTwitter and iInstagram.


well isnt that the point? to have all apps look similar to have nice "flow" throughout the whole os. i expect more apps to follow the same design
Score: 3 Votes (Like | Disagree)

It is a huge pain to mess with the official client. Why would they bury functionality like that?
Score: 3 Votes (Like | Disagree) 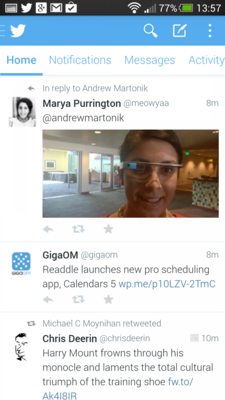 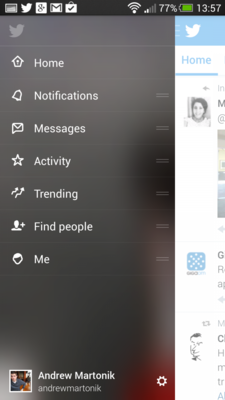 tai.michael
Wow, I am actually surprised these giant corporations are actually copying Jony Ive's design aesthetics. Get it straight through your heads, everyone. Jony Ive is not a UI designer. He doesn't understand the differences between print and digital, and how to use color properly for each medium. If you think a solid color is a vast "improvement" over a subtle gradient, bevel and drop shadow, you got to be out of your mind.

Can't these companies use their own brains and realize that ****ing frosted glass is just plain ugly, let alone terrible for user experience?
Score: 2 Votes (Like | Disagree)
Read All Comments