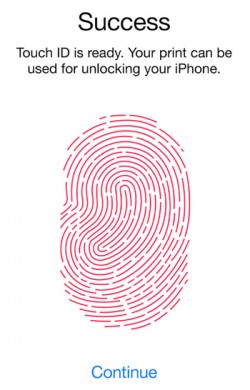 According to an internal first look guide for use by Apple Retail Store employees (via 9to5Mac), the company is planning to implement a Touch ID demo app within iPhone 5s demo units that will show customers the process of registering a fingerprint for on the device.

Specifically, the app will allow in-store customers to register a single fingerprint on the demo unit, compared to the five fingerprints that the actual device allows, and show that it has been recognized through the Home button. The demo will then ask the user to place a different finger on the sensor, showing how Touch ID can reject unrecognized fingerprints for security purposes.

Last week, an Apple spokesman shared additional details about Touch ID amid security concerns, noting that no images of fingerprints are stored on the device. The demoing of Touch ID on the iPhone 5s in Apple retail stores is part of the overall sales push of the iPhone 5s to customers, with the internal first look guide also suggesting quick demos of the 8 megapixel camera to customers along with the new features of iOS 7. The guide also suggests “key messages” that Apple Retail Store employees should relay to customers, which involve speaking about the 64-bit A7 processor, M7 coprocessor, longer battery life, and numerous other features along with promoting the Touch ID fingerprint sensor.

Apple is set to begin selling the new iPhone 5s and low-cost iPhone 5c in-store this Friday, September 20. The company began taking pre-orders for the iPhone 5c in ten countries on September 13 with launch-day supplies generally holding up well. Online orders for the iPhone 5s are set to begin in the U.S. at 12:01 AM Pacific Time on the same day as in-store availability, with other countries seeing similar early-morning debuts local time. 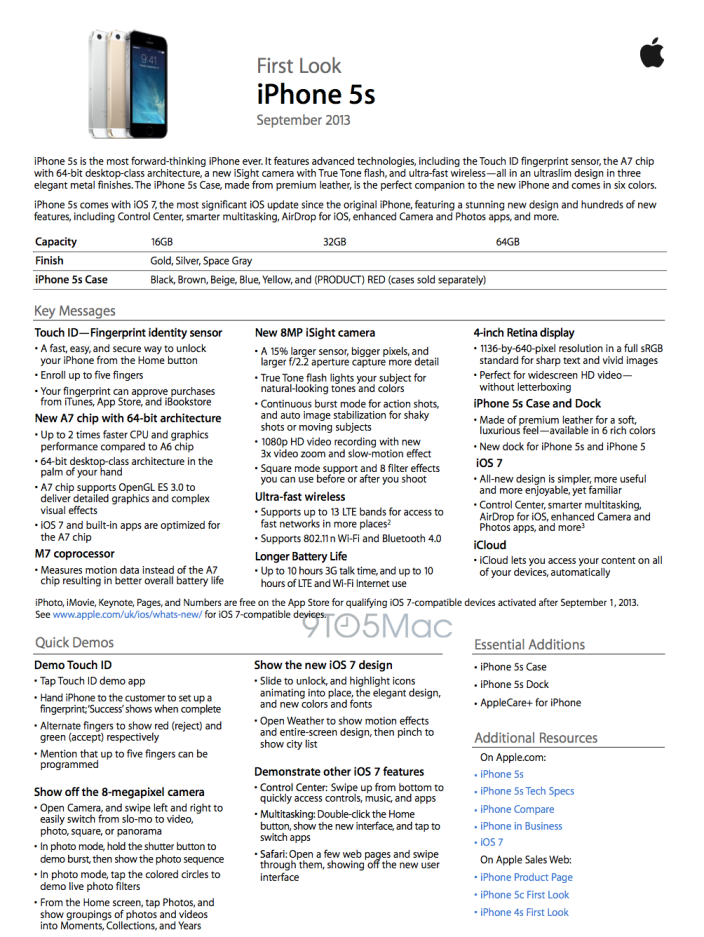 At the end of the year, the NASA will say they have collected 900+ million fingerprints and photos globally thanks to the support of Apple and the touch ID and front facetime camera.


Really?? NASA now? I thought they were more into super novas!
Rating: 5 Votes

unplugme71
At the end of the year, the NASA will say they have collected 900+ million fingerprints and photos globally thanks to the support of Apple and the touch ID and front facetime camera.
Rating: 3 Votes

Michaelgtrusa
They will have long lines.
Rating: 3 Votes

They will have long lines.

bchery21
Cool - I was wondering how this feature would be practiced in the Apple stores...
Rating: 1 Votes

I work with biometrics, and I can safely say it doesn't take the Mythbusters to do it.


So how does it compare to cracking a regular passcode on an iPhone? I think the idea behind the fingerprint sensor is not to make it uncrackable, but to simply make it easier for more people to lock/unlock their iPhones (seeing as how about 1/2 of iPhone users currently don't use a passcode).
Rating: 1 Votes

At the end of the year, the NASA will say they have collected 900+ million fingerprints and photos globally thanks to the support of Apple and the touch ID and front facetime camera.

sammich
In before: 'the NSA is behind this'.
Rating: 1 Votes
[ Read All Comments ]