It appears that Apple may be planning to discontinue the Cards app that it first released for iOS in 2011. Opening the app with devices running both iOS 6 and iOS 7 results in the following message: "The Cards service is no longer available."

The Apple.com page for the app has also been removed, now redirecting to iPhoto '11 for the Mac. 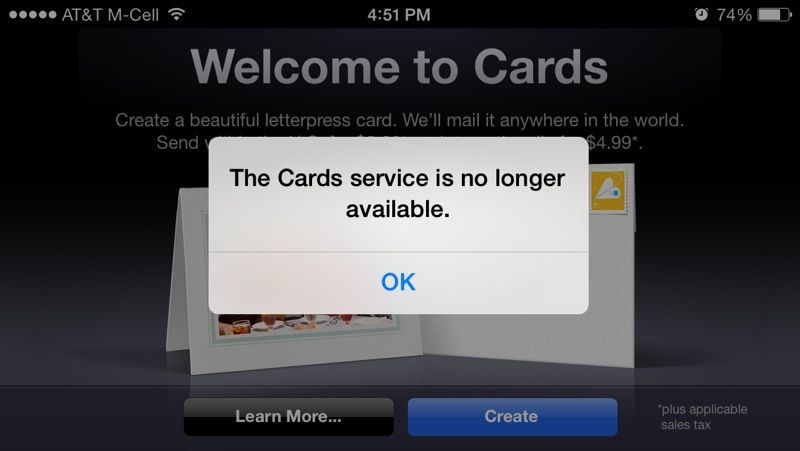 Cards, which initially debuted alongside the iPhone 4S, was designed to be an iOS version of the greeting card creation service found within iPhoto ’11. The app allowed users to create a card, which was then printed, mailed, and sent directly to the recipient by Apple. Cards sent within the U.S. were priced at $2.99, while cards sent elsewhere were priced at $4.99. postage included.

While it is unclear whether or not the app will be revived with an iOS 7 update, the wording indicates that it will be quietly pulled from the App Store. Currently, while new cards cannot be created or sent, old cards can be viewed.

Cards, which is free, is still available for download in the App Store for the time being. [Direct Link]

Update: An Apple support document confirms that the Cards app will be discontinued on September 10, 2013.

It was useless anyway.


That's alright, No one used it anyway.


I did. I had pleasant results from people that I sent cards to anyway.

It was useless anyway.


not everyone is you. we loved sending cards with for the holidays and from vacations.
Rating: 9 Votes

Cougarcat
Well, I used this all the time, and the cards were always gorgeous.

Can anyone recommend a similar service?
Rating: 9 Votes

Apple is just cleaning out the junk they added over the past few years, like Ping. I wonder what service they'll drop next?


They didn't really drop the service, as I've now realized with the article update, you can just make them with iPhoto. I'll miss the push notifications though.

My guess is since iPhoto for iOS is now free (for new iOS devices anyway) the next major update will include cards support. Maybe.
Rating: 5 Votes

musika
I guess they couldn't figure out how to make flat enough cards.
Rating: 4 Votes

djtech42
It was too skeumorphic ;)
Rating: 4 Votes

Well, I used this all the time, and the cards were always gorgeous.

Can anyone recommend a similar service?

iLoveMyApple
I always meant to try it out, but always forgot it existed and by the time I actually remembered it was there, I had already bought a card at the store.
Rating: 4 Votes

zipper77
I used this app every chance I got. My friends and family were always blown away by the cards. It's better than iPhoto '11 because the iOS app actually mailed the cards for you. Incredibly disappointed to see that this was discontinued. I hope they integrate the cards app into an iOS iPhoto revamp.
Rating: 3 Votes

MonstaMash
Cards wasn't strong enough as a standalone app. Many people used just once, then forgot about.

Once Apple revamps iPhoto for iOS 7, I wonder if they will integrate the standalone Cards features?
Rating: 3 Votes
[ Read All Comments ]