An Ohio man, Noam Lazebnik, has filed a class action lawsuit against Apple for failing to provide iTunes users who purchased a "Season Pass" for Breaking Bad with the full season of 16 episodes, reports GigaOM.

Season 5 of the show was split into two eight-episode sections that aired in July of 2012 and August of 2013 and iTunes customers were asked to pay $14.99 to $22.99 (Standard and High Definition) for each half of the season. Lazebnik has levied a charge of false advertising against Apple for not providing consumers who purchased the first eight episodes with the second half of the season.

While Apple is charging $34.99 for a 16-episode run of a similar show, Suits, other television providers like Amazon and Microsoft have also split the two sections of Breaking Bad into two purchases given the year-long gap between airings.

Breaking Bad can currently be purchased on the iTunes Store, and tops both the "Top TV Episodes" and "Top TV Seasons" on the store’s charts. 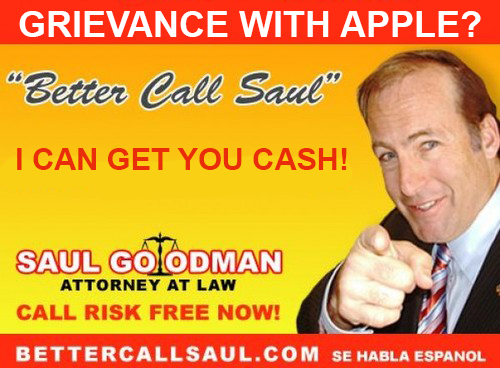 cfischer83
I agree. I bought "season 5" of breaking bad last year knowing that there would be 8 more episodes, only to find that it's been split into "season 5" and "the final season".... Even though season 5 IS the final season. There was no disclaimer anywhere that I was only buying half a season (I checked thoroughly).
Rating: 16 Votes

Andy-V
You've got to admit, it's not clear. Bit this is on AMC not iTunes.
Rating: 14 Votes

cmChimera
This is AMC's fault and not Apple's, but I do agree that it was wrong of AMC to do this.
Rating: 13 Votes

ElectronGuru
The worse thing a well meaning company can do is show people what they can't have. The second worst thing is creating expectations (intentionally or not) and then not delivering.

Seasons got their name because that's how they were laid out. All this stretching and rearranging is creating confusion. It's obviously not apples fault but they're the guys who took the payment.
Rating: 8 Votes

What suffering this man has endured... The anguish! Somebody should get sued.

Every time a leaf falls from a tree, someone ought to be forced at gunpoint to surrender their lifes savings.

It's the American way.

MattJessop
Fully agree, that was very misleading and if it had been me I'd be pretty damn hacked off. But this has nothing to do with Apple, they just provide the store. It's like me going and suing HMV because Universal split Battlestar Galactica's final season into 2 in the UK to make quick money. Or the whole Family Guy/American Dad seasons in the UK. People will vote with their wallets, but at the end of the day it's wrong to mislead like this.
Rating: 7 Votes
[ Read All Comments ]