Tuesday August 20, 2013 8:50 am PDT by James Cull
The U.S. Patent and Trademark Office (USPTO) published a newly-granted Apple patent (via AppleInsider) addressing a means for extending the multi-touch input present on Apple's touchscreen devices to the airspace above the screen, allowing for 3D manipulation of objects via 3D gesture inputs.

The patent, which was filed in July 2012 and is entitled "Working with 3D objects", describes a system that detects both 2D objects in a user interface and a 3D gesture input close to the device's surface, which then generates a 3D object that is presented in the user interface of the device.

According to the patent, the device detects the location of the user's fingers using a combination of both the capacitive touch sensors and the proximity sensors located in the display. The new technology would work in combination with the existing touchscreen controls on the device, and would allow users to lift their fingers off the screen in order to "pull out" a 3D shape from a 2D one (as the drawing in the patent shown above demonstrates), just like in most existing CAD programs.

Techniques and systems that support generating, modifying, and manipulating 3D objects using 3D gesture inputs are disclosed. For example, 3D objects can be generated based on 2D objects. A first user input identifying a 2D object presented in a user interface can be detected, and a second 3D gesture input that includes a movement in proximity to a surface can be detected. A 3D object can be generated based on the 2D object according to the first and second user inputs, and the 3D object can be presented in the user interface where the 3D object can be manipulated by the user. 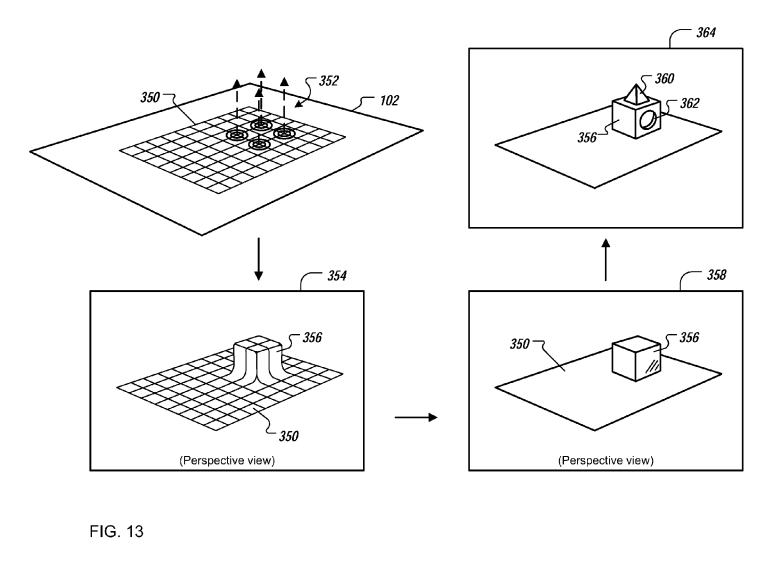 Other uses for the new technology include the ability to use 3D gestures to sculpt using virtual clay-like materials and to change parameters such as shadows, brightness, textures and more. The patent may mark Apple's move to push the iPad more as a creative device which can be used in a variety of industries, including computer-aided design (CAD).

The idea of controlling a device using gestures is not new, however. The Samsung Galaxy S4 currently features a technology known as "Air Gesture", which allows the user to control their device using a number of simple gestures. But Apple's patent covers different technology -- whereas Samsung uses a light sensor to detect the user's gestures, Apple's technology would instead be embedded into the device's screen.


Apple is not patenting GESTURES. Apple is patenting the process by which a computer can determine what gesture you are making by using touch sensors and proximity sensors.
Rating: 40 Votes

Tones2
Ugh. This is NOT something that should be patentable. Gestures are not patentable. In all seriousness, I myself thought of this exact idea like 5 years ago. The patent system is insane.
Rating: 17 Votes

Putting something in a movie does not mean you own the patent.

Thinking up the CONCEPT of a time machine, and actually DESIGNING said time machine are 2 different things. The first is NOT patentable, the second IS.

I'll patent the concept of 'making money' if concepts are patentable, and sue anyone who makes money from doing anything.


He was joking dude.
Rating: 14 Votes

Aren't a lot of these patents about implementation?


Actually ALL patents are about the implementation. And this is what makes the patent system so great. You get lots of different people/companies coming up with tons of different methods and implementations to solve some sort of problem. And then when the patents expire, everyone gets to use whatever turned out to be the best implementation. This is how the world progresses with technology.

If you ever see someone posting on a forum.... "That shouldn't be patented! That's already been done before!" ...that's when you know the poster doesn't have the slightest clue what they're talking about. They are ignorant of how the patent system works.

It's all about the specific method or implementation you went about to achieve it in your own unique way. And some implementations turn out to be better than others... which is what the patent system is there to help produce... tons of different and creative implementations of how to solve often the same problem so that increasingly better ones emerge rather than everyone just using the first one that exists.... and encouraging this creativity (and the sharing of it with the world by detailing it in patent filings) by giving financial incentives for doing so.
Rating: 9 Votes


Did you invent it though? Or did you sit on your idea and somehow expect that no one else would actually do something with it? Furthermore, as pointed out, gestures are not being patented.
Rating: 7 Votes


First of all, its all about the implementation. People like you think a patent is just about an idea, which is incredibly frustrating how much people misunderstand the difference between generic ideas and implementation. Ideas are meaningless without execution. Thats what the patent claims are for. You don't get a patent for just an idea. You have to figure out HOW. You have to make explicit claims for your method, what is needed to accomplish the idea. THOSE ideas, the ideas that are necessary to achieve the larger vision, are what gets patented.


The technology that makes it happen IS patentable. This doesn't happen just because you think about it. You have to develop the physical technology to make it work and that's patentable. And if Apple makes it work and it becomes popular you can bet your last dollar Samesung will copy it.
Rating: 6 Votes

Ok.. right in the post we're all reading and responding is not the actual claims.

I repeat, can you point in what claim is said that the proximity sensor is located IN the touchscreen display?


if you cant be bothered to read the claim yourself, here it is, in claim #1:

...the sensor is in the display, detecting the proximity and distance of the finger from the surface.

the Kinect doesnt have a surface.

What the heck are you talking about? Can you point where the heck i have said anything about the ****ing patent being bogus or if there is prior art?


i responded to a post suggesting this is bogus because the Kinect did it first. i pointed out that the Kinect doesnt even have a display surface, thus its completely different since this sensing is done in the display surface. you are being contrarian for whatever reason.

if you dont think this is a unique idea being patented, show us some prior art. i honestly would love to see it.
Rating: 5 Votes

AngerDanger
I can't wait to never see this implemented and then read stories about litigation with Samsung over it.
Rating: 5 Votes