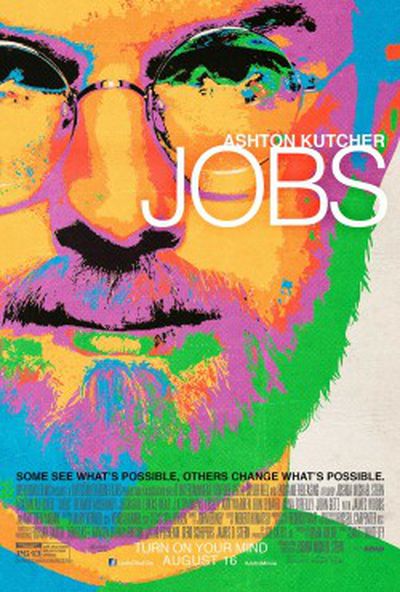 According to box office reporting service Box Office Mojo (via AppleInsider), Joshua Michael Stern’s Steve Jobs biography "Jobs" made an estimated $6.7 million this weekend, less than the $8-9 million its distributor, Open Road Films, projected. The film was made on a budget of $12 million, and played on 2,381 screens for its opening weekend.

Playing at 2,381 locations, Jobs opened in seventh place with an estimated $6.7 million. While it was never expected to match The Social Network, it's still very disappointing to note that the Steve Jobs biopic earned less than one-third as much as the Facebook story. This is also one of star Ashton Kutcher's lowest openings ever—among nationwide releases, it's only ahead of 2003's My Boss's Daughter ($4.9 million).

Jobs had plenty of issues, including awful reviews and a comedy star playing dramatic (almost never a good idea). Most important, though, was the movie's apparent tonal issues: while plenty of people enjoy their Apple products, the deification of Steve Jobs is a bit of a turn off. Jobs received a weak "B-" CinemaScore, and all indications are that it will disappear from theaters quickly.

The movie has been the subject of mostly poor reviews over the weekend, and currently holds a score of 25 out of 100 on movie review aggregation site Rotten Tomatoes. According to the site, the critical consensus around the movie proclaims that it is an “ambitious but skin-deep portrait of an influential, complex figure,” and further summarizes the film in saying that “Jobs often has the feel of an over-sentimentalized made-for-TV biopic.”

A second Steve Jobs movie, from screenwriter Aaron Sorkin, is also in the works for 2014. In a public appearance last year, Sorkin disclosed that the entire movie "is going to be 3 scenes, and take place in real-time." Each of the three 30-minute scenes will take place backstage before three significant events in Jobs’ career, including the launches of the original Mac, the NeXT cube, and the iPod.

AfternoonDelete
This would never have happened if Steve were around.
Score: 52 Votes (Like | Disagree)

shootingrubber
Is this really that surprising?
Score: 19 Votes (Like | Disagree)

DrMotownMac
First of all, I actually enjoyed the movie in spite of what the critics said. While Ashton Kutcher is far from Sir Lawrence Olivier, there are a lot of worse actors in Hollywood, and the movie itself was very interesting, especially with respect to the dynamics between Steve and the Apple board in the mid 80s and again in the late 90s when he returned. While many details and conversations may have been inaccurate, the GIST of the movie was very accurate, even when comparing it to the known facts that are out there (from Isaacson's book as well as "Pirates of Silicon Valley", for example).

Meanwhile, Sorkin's screenplay consists of THREE 30 MINUTE SCENES IN REAL TIME, BACKSTAGE BEFORE PRODUCT LAUNCHES?!? And that is considered to be a better way to show a biography? I mean, I get the whole artsy-fartsy thing, and Sorkin snorts all kinds of mind altering drugs, and it's "thinking different" and all that crap, but seriously? Did Sorkin even READ Walter Isaacson's book? That is not at all how the book told the story!! And does anyone think that movie is going to be able to capture Jobs' personality and everything he did in 3 scenes in real time?!?!

It would be one thing if he were taking the non-linear approach of using the product launches to have flashbacks to the 1970s, etc., thus actually showing Jobs' life. But I'm not sure I'm interested re-watching Steve Jobs launch the Mac, the Next Cube and the iPod. I know, you're all just itching to give me the no-longer-available "thumbs down", because I didn't tow the party line and bash Ashton Kutcher while praising Aaron Sorkin. But I think his interpretation of Walter Isaacson's book SUCKS, and this method of telling a great man's life story in 3 real-time half hour scenes is ridiculous.

Well, that's my two cents. I think if some of you people can forget "Dude, Where's My Car?" and "That 70's Show" for two hours and just go in with an open mind, you may actually enjoy this "Jobs" movie more than you think...particularly if you're an already knowledgeable Apple enthusiast. And I think that's a forgone conclusion if you're reading and posting on the MacRumors Forum.

P.S. The reason Woz hated it is because he was portrayed as a minor player in the Apple saga, at least following the Apple II. Plus Josh Gad is a fat clown, and Woz wasn't even fat until the past 10 or 15 years. I would have hated it too if Josh Gad were playing me!
Score: 14 Votes (Like | Disagree)

iapplelove
I'm sure most would rather just download this one when available and watch it at home
Score: 11 Votes (Like | Disagree)

JackieInCo
The average person would not be interested in this. Only people who knew who Steve Jobs was and even then, were die hard fans, would go see this movie.

There are many people who own Apple products who don't even know who he was.
Score: 9 Votes (Like | Disagree)
Read All Comments