A new support document has emerged on Apple's website today, revealing a way for iMessage users to report unwanted messages, or spam, directly to Apple.

To report unwanted iMessage messages to Apple, please send an email with the following details to: imessage.spam@icloud.com

In late March it was reported that a group of iOS developers had been hit with denial-of-service attacks via iMessage that saw them receiving a series of rapid-fire messages. Previously, it was not possible for users to take action against possible spam attacks. Now users can alert Apple to any possible problems directly. 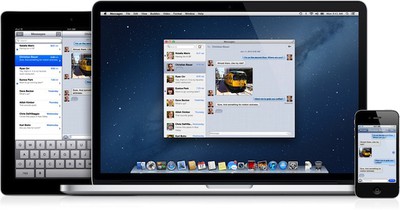 Similarly, users with iOS 7 wanting to fight potential spam will have the ability to block contacts in the Messages, Phone and FaceTime apps, but users with previous versions of iOS will not be able to use that feature.

I guess it's nice but is it just me or is this kind of a half-assed solution? Take a screenshot and send an email? Why not just put a button or menu entry in Messages to report it directly. It just seems overly complicated...
Score: 18 Votes (Like | Disagree)

haruhiko
In the long term this should be incorporated into the Messages app. In the current form it's more like a punishment to the victim by requiring them to draft a whole e-mail containing all the details, the screenshot, date and time, etc. etc.

I don't know how did the spammer get my contact details but somehow they managed to send several spam messages to me asking me to download a Chinese iOS game.
Score: 7 Votes (Like | Disagree)

JoshGlzBrk
This will be useful. I'm excited for the blocking abilities in iOS7 too.
Score: 4 Votes (Like | Disagree)

HiRez
Let's be honest, if we discovered Microsoft or Google asking users to use this method, we'd be shaking our heads and making fun of them right now.
Score: 2 Votes (Like | Disagree)

Mike MA
Sending a Mail for notice is not exactly a dedicated reporting tool, is it?
Score: 2 Votes (Like | Disagree)

iDuel
It's better than nothing, but there should just be a "Report Spam" button somewhere which automates the whole process.

Maybe Apple is working on such a system and is using the email method as a placeholder.
Score: 2 Votes (Like | Disagree)
Read All Comments