In its latest report on Apple, Consumer Intelligence Research Partners (CIRP) surveyed a number of recent purchasers of Apple products to determine U.S. buyer's purchasing habits regarding preferred capacity and model of a variety of Apple products. 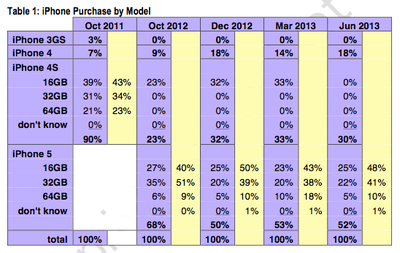 The iPhone 4 and 4S aren't the only older iOS devices to be seeing significant sales success. The iPad 2, which is particularly popular in educational and enterprise environments, accounted for 34% of total iPad sales in June. The Retina iPad and iPad mini each counted for a third of total sales.

Finally, though the Mac Pro has not been significantly updated in several years, it still accounts for 5% of total Mac sales, according to the survey -- and is more popular than the Mac mini. The MacBook Pro makes up 70% of Apple's notebook sales, with more than half of those sales going to the Retina display-equipped models.

Apple does not break down sales by model, and though this data is from a survey and not company-provided, it gives some insight into the sales preferences of Apple's customers.

the Mac Pro [] still accounts for 5% of total Mac sales[] and is more popular than the Mac mini.

buckers
I'm surprised the Mac Pro has been out-selling the Mac Mini
Score: 9 Votes (Like | Disagree)

There are very few valid reasons to buy a 13" MBP

16GB RAM and having to always carry around adapters and external drive(s) is very annoying and makes the Air less portable than the MBP. IMO, there are very few valid reasons to buy a 13" MBA over the MBP :)
Score: 8 Votes (Like | Disagree)

CDs/DVDs and Ethernet ports are still a thing and it has the lowest entry price point to the Pro line. All in, the 13" MBP still provides good value for budget buyers. Even more so if you're a student. Especially since the White MacBook disappeared.

Not everyone wants to spend more to find external solutions for stuff that should arguably be built in already.
Score: 7 Votes (Like | Disagree)
Read All Comments