VLC For iPhone and iPad Returns With Wi-Fi Upload, Dropbox Sync and More

Several years ago, the popular desktop media player VLC was released for iPhone and iPad on the App Store. However, the app was eventually removed from the store over copyright issues with the GPL license.

VLC for iOS is still rolling out to international App Stores, beginning in Australia and New Zealand and arriving in the U.S. this evening. 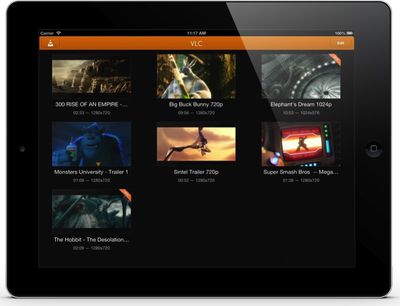 Today, it’s my pleasure to announce that VLC for iOS is back on the App Store. It’s available free of charge in any country, requires iOS 5.1 or later and runs on any iPhone, iPad or iPod touch.

This is more than an upgrade of the initial version: it’s a full re-write. From the ground-up. Relying on the power of MobileVLCKit and its underlying libvlc, we started with modern video and audio output modules offering faster drawing, full support for 10bit H264 encodings, retina displays and lower latency.

Some of the major features include:

Wi-Fi Upload - Allows users to upload files directly to the iOS version of VLC through a web browser on the PC or Mac.
Dropbox Integration - Play media directly from Dropbox or download it for offline playback.
Download from Web - Download files from any web server for offline playback
Network Streams - Play any network streams support by VLC media player for desktop operating systems
3rd-Party App Integration - Any app with a 'share' dialog can use VLC for iOS for media playback
Video Filters - Video playback can be modified for brightness, contrast, hue, saturation or gamma in real time.

To avoid further copyright issues, VLC for iOS is fully open-source and the video playback and library kits are available for integration by other developers. An SDK will be released later this summer.

VLC has already launched on the Australian and New Zealand App Stores and will be launching on others throughout the day and evening. It should be available in the U.S. at 11PM Eastern time. [App Store Direct Link]

POOF - and just like that, it's not available in the US STORE!! :mad:


do you find yourself constantly pushing on doors that have "pull" signs?

Simplicated
I guess Rémi Denis-Courmont finally concedes that their Nokia phones were a flop.

(He is the person who requested the takedown of the original app, and was found to be a Nokia employee)
Score: 8 Votes (Like | Disagree)

POOF - and just like that, it's not available in the US STORE!! :mad:

MacDawg
Looking forward to checking it out when it comes available in the US Store
Score: 5 Votes (Like | Disagree)

Ichabod.
Quick! Download it before it goes away!
(Oh, not available yet...)
Score: 5 Votes (Like | Disagree)
Read All Comments