After introducing iWork for iCloud during its Worldwide Developers Conference and sending invites to registered developers soon after, Apple has begun inviting normal users to test the software according to a number of MacRumors tipsters.

The following invitation is being sent out to users who have been accepted into the iWork for iCloud beta: 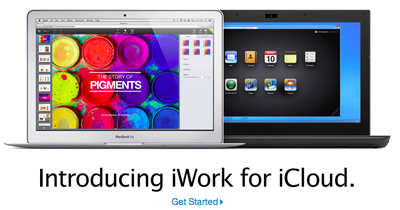 We’ll soon be introducing a new and exciting feature to iCloud. It’s called iWork for iCloud and it’s a suite of apps — Pages, Numbers, and Keynote — that make it easy for anyone with an iCloud account to create and edit great-looking documents, spreadsheets, and presentations right on the web.

We’d like to invite you to be one of the first to try it, so we’re giving you early access to the iWork for iCloud beta. All you have to do is sign in to iCloud on a Mac or a PC using the current version of Safari, Chrome, or Internet Explorer. Then just click on Pages, Numbers, or Keynote and you’re off.

We’re really proud of these apps and we’d appreciate your help in making them as great as they can possibly be. So we’d love to hear your feedback as you use them.

Sign in to iCloud.com to get started with iWork for iCloud today.

iWork for iCloud offers in-browser versions of Apple's iWork software suite, including Pages, Keynote, and Numbers. The software can be accessed from both PC and Mac computers as well as a number of mobile devices. It is expected to be released to the public later this year.

Thanks to Jason and the other tipsters!

AngerDanger
Gone are the days of having to pay the Apple tax just to make a pretty pigment presentation!

Wow a screenshot of Windows from Apple and it's an up to date version? I remember they used to use screens of XP well into Windows 7's release.


I remember when I used XP well into Window 7's release.
Score: 15 Votes (Like | Disagree)

I remember when I used XP well into Window 7's release.

I still use XP well into Windows 8's release.

Got me excited for a second. I thought the Blackbook was back!


I thought it was back in black.
Score: 3 Votes (Like | Disagree)

TheGdog
I didn't get an email, but It shows up in iCloud for me. Pretty cool IMO!
Score: 3 Votes (Like | Disagree)

ChrisA
I've been on the beta test for some number of weeks now. It works well enough but I never find a real use for it. What's the point if you have a Mac you can run iWork native on the Mac. This is great if you are on a PC, or were seriously broke and could not afford Pages and Numbers. But if you own a Mac I don't see the point.

One serious flaw is that all the Mac features are not supported so if you open a Mac iWork document in the on-line version you get asked if you want to make a copy with the format features removed. You click "yes" and go. But now how to save your edits back to the "real" document? For this to work all version must be 100% identical.

The on-line version can't have every font you own on the Mac either. So if you open a document using the online editor and it uses some font that is not on-line it should offer a kind of substitution
Score: 2 Votes (Like | Disagree)

nikicampos
Wow, it amazes me how people complain about free stuff.
Score: 1 Votes (Like | Disagree)
Read All Comments