Wednesday July 3, 2013 11:15 am PDT by Jordan Golson
Tim Bradshaw, a tech reporter with the Financial Times, received this poster from Apple celebrating the upcoming 5-year anniversary of the App Store. 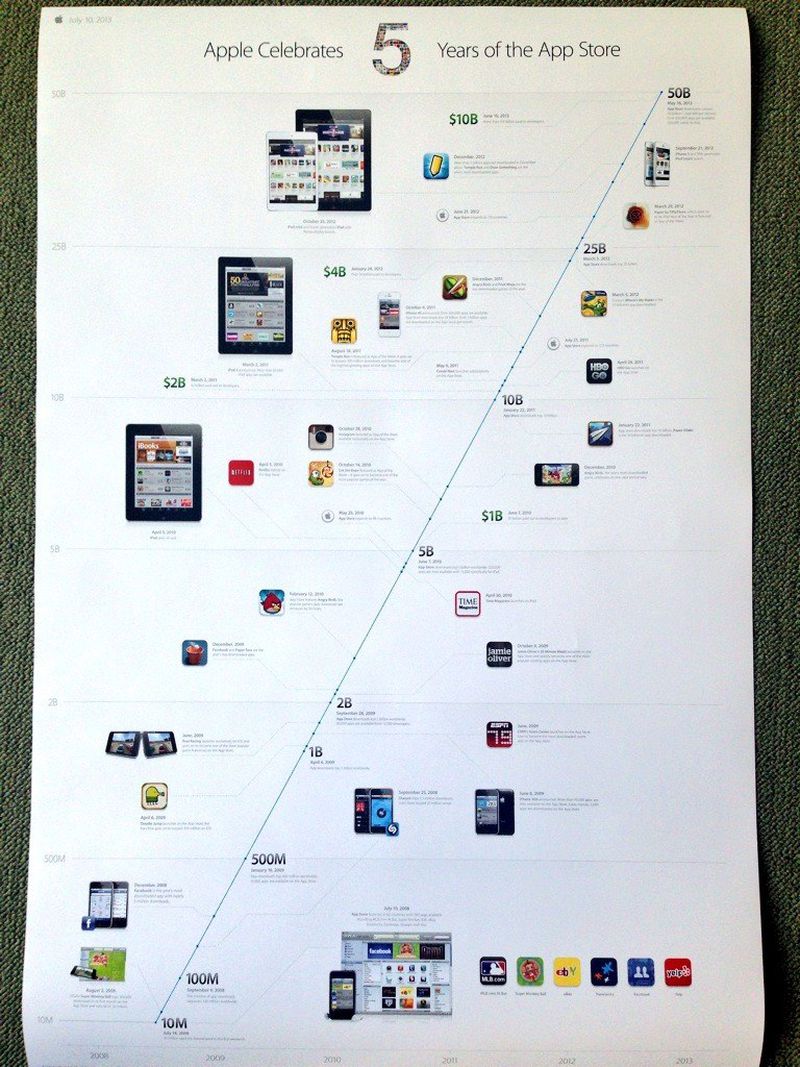 The App Store, which originally launched on July 10, 2008, has seen more than 50 billion app downloads across nearly a million individual apps.

Apple sent a similar promotional item to reporters to celebrate the 10th anniversary of the iTunes Store, though that version included a gift card redeemable for 100 songs hand-picked by the iTunes staff.

jimN
Ironically when Jobs first described apps for the iPhone they were all going to be Webapps and would be run online. People complained about them not being native. Had this process been more widely adopted we'd all live in a platform agnostic world of HTML5 apps without a walled garden.

Instead people complain about how Apple locked everyone in, stifled innovation and copied Android. Make your minds up.
Rating: 6 Votes

phr0ze
Where can I see this in high res?
Rating: 6 Votes

How many are in the trash?

We Collectors want one!
Rating: 4 Votes

Pretorian25
I want one!

Any reporters out there who dont want it let me know!
Rating: 4 Votes

monaarts
Add the App Store to the AppleTV for the 5 year anniversary! :apple:
Rating: 4 Votes

Carlanga
all I got to say is thank you hackers for jailbreaking the first iPhone and making an App Store in an iPhone a reality. :cool: :apple:
Rating: 3 Votes

barkomatic
It's amazing when you consider that Steve Jobs didnt initially want third party apps on the iPhone.
Rating: 3 Votes

Santabean2000
Amazing to see a concept get such quick adoption. It doesn't even seem that long ago we didn't even have cell phones.

Kids today are living in a vastly different world to the one that I knew growing up. :eek:
Rating: 3 Votes

TouchMint.com
I would love to have one. How about all the devs get one too. :D
Rating: 3 Votes