Poppy is an iPhone accessory that looks like a cross between a set of binoculars and the View-Master toys designed for children. Poppy morphs the iPhone into a 3D image viewer and camera, which can be used to capture 3D videos and photos.

The device itself functions similarly to a View-Master, with two eyepieces to look through and a top slot where the iPhone is inserted. When the iPhone is firmly in place, Poppy can be used to record 3D photos and videos and view the 3D content that others have created via YouTube.

Poppy is capable of viewing YouTube's entire catalog of 3D content, and according to the creators, 3D content on Poppy looks much better than with traditional 3D glasses.

There are no electronics inside Poppy, which instead uses a system of mirrors to record two stereoscopic images through the iPhone's camera, which are then combined into one 3D image or video.

When you look in the viewfinder, Poppy's lenses combine the two video streams into a single, crisp, 3D video. It's beautiful, and really hard to describe or show in two dimensions.

It doesn’t need batteries and there are no electronics. It's just optics and your iPhone's camera and screen, so we can keep the price low without sacrificing quality.


While Poppy will come with a dedicated iOS app, any standard camera or video app (including Vine) will work with Poppy. Interested backers can get a single Poppy for $49, while a $59 Poppy Plus set provides a neck strap and a microfiber bag. Poppy is estimated to ship in December 2013.
17 comments

Reminds me of one of these things
Image (http://3.bp.blogspot.com/-xqxoJYtQB48/UYbKnDj05hI/AAAAAAAABus/G3HwYvSFBaA/s200/view+master.jpg)

boshii
Reminds me of one of these things 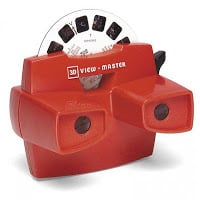 0098386
Even though the 3DS cameras are very low res, I find myself looking more through my 3DS photos than my iPhoto or SLR ones (once processed). Maybe I'm a sucker for 3D.
Score: 1 Votes (Like | Disagree)

3D recording and playback for $49? Even better.
Score: 1 Votes (Like | Disagree)

Available from Amazon for < $8US (but note that I don't believe the iPhone 5 fits in the My3D). But nice that they have optics for taking pics/videos.

apfeljonas
And best of all, you can look like an utter moron for just $49!
Score: 1 Votes (Like | Disagree)
Read All Comments