EverySteveJobsVideo (via The Loop) today released a never-before-seen video of Steve Jobs in 1994, while he was at NeXT, pondering his legacy in the personal computer field and whether he thought he would be remembered for his work in the future. 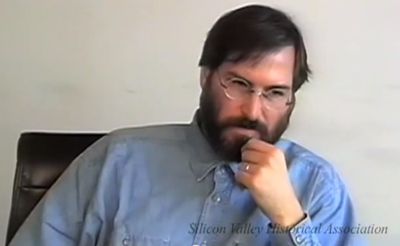 While Jobs is primarily talking about his accomplishments with Macintosh and personal computing, his thoughts could easily translate to iPhone, iPod and iPad as well.

The video was provided by the Silicon Valley Historical Association and is a clip from a 60-minute documentary built around a 20-minute interview they had with Jobs back in 1994. The film, called "Steve Jobs: Visionary Entrepreneur" focuses on Jobs giving advice to young entrepreneurs:

Steve Jobs was asked to give advice to young entrepreneurs who wanted to go out and start their own businesses. He talks about risk and the willingness to fail, the role of building illegal blue boxes prior to founding Apple Computer, and his philosophy on how to approach life.

Atari founder Nolan Bushnell, who hired Jobs to work at Atari, is also present in the full documentary and talks about both Jobs and Apple co-founder Steve Wozniak.


"Steve Jobs: Visionary Entrepreneur" is available on the Silicon Valley Historical Association's website as a $14.99 download, a $24.99 DVD or a $4.99 audio track.
91 comments

bacaramac
I wonder how many people in history have the logical insight that jobs had on technology. It's weird how you can watch a 20 year old clip and it still be relevant. This isn't the first clip where Jobs' statements have remained relevant years later.
Score: 20 Votes (Like | Disagree)

unlimitedx
You will always be remembered for your vision and work, Steve!
Score: 8 Votes (Like | Disagree)

iPadPublisher
I've heard that Steve was pretty amazing with analogies that would help you understand what he's saying... this sure is a good example of that. :)

Interesting how he was incorrect though. In another 4 years, the original iPhone will be 10 years old, and while he was correct that it is not usable anymore, it will still go down in history as the phone that started the smartphone revolution. The same way the iPad revitalized the tablet market and the iPod revolutionized the portable music market.

But I think that was his point exactly... he built the first major layer of "Smart Phone Mountain" but already his own company, and others, have contributed their layers on top, and that initial piece, anyway, isn't seen or used by anyone... he wasn't saying that it wouldn't be remembered or go down in history for its worth, but more that because the technology moves so quickly, the iPhone 1 is but a distant memory already, not even ten years later. Where an architect can be remembered for his amazing church for hundreds of years later, because it still stands, and is still a church to this day. :apple:
Score: 7 Votes (Like | Disagree)

Jaredly
Jobs would be happy to know that the apple 1 is considered a piece of art and that somebody bought it for some obnoxious price (I forgot the exact amount).
Score: 7 Votes (Like | Disagree)

tbobmccoy
I still use my iphone original generation... Every time I sell my most recent iphone to upgrade, I'm on my old school iphone for a short amount of time :)
Score: 6 Votes (Like | Disagree)

Drunken Master
This has to be a record time for a thread devolving into a cheap argument.
Score: 5 Votes (Like | Disagree)
Read All Comments