Earlier today, we noted that photos of what was claimed to be the bare logic board of the iPhone 5S had surfaced, showing some changes to the board's layout compared to the iPhone 5 and perhaps even a slight narrowing of the board itself.

Several repair firms, including iHeart Repair, have shared with MacRumors a new set of images from a supplier showing the display assembly of the iPhone 5S. While the low-resolution images do not immediately reveal any significant changes to the technology behind the device's display, there is one item of interest supporting the claim that the logic board photos from earlier today are genuine. 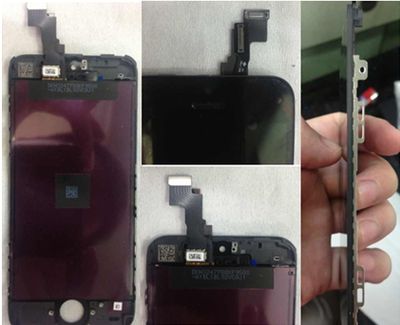 iPhone 5S logic board (left) vs. iPhone 5 logic board (right)
Display/digitizer connectors boxed in red
On this iPhone 5S part, one connector is oriented vertically and the other horizontally. This corresponds to the logic board seen in the photos earlier today, with a vertical connector near the top inside edge of the board and a horizontal one along the top edge.

Apple's iPhone 5S is expected to appear largely identical to the iPhone 5 from the exterior, but Apple typically makes significant internal changes in its new models even when using similar casing parts. It appears that the iPhone 5S, rumored for release around September of this year, will be no different in that regard, although many specific details on the internals of the device have yet to be revealed given that the logic board leaked earlier today does not contain any chips or other components.

Update: Fanatic Fone has posted another set of comparison photos (via ETrade Supply) showing the display assemblies in much higher quality.

Use the space savings for extra battery volume. :)
Score: 29 Votes (Like | Disagree)


Uh....The iPhone 5 was FAR more powerful than the 4s, had an upgaded front facing camera, 3 mics, a bigger screen and some decent improvements to the rear camera as well. It was not a cosmetic redesign. Neither was the 4.
Score: 28 Votes (Like | Disagree)


What in the world are you using your phone for? I'm not saying you're a liar or anything but I've honestly never had any problems with any of my 4 iterations and they've all been heavily used. I've also not heard of this problem from any of the dozens of iphone users I know.
Score: 25 Votes (Like | Disagree)


What exactly are you doing to your phone? I've never had this happen with my iPhone 4 or 5.
Score: 15 Votes (Like | Disagree)

Agreed. There will be nothing new with the iPhone 5s other than faster internals, a slightly bigger battery that will give us 30 minutes more life if we turn everything off and dim the screen to 10%, and the exact same "everything-else-that's-in-the-previous-model" that we always get with the "S" models.

If you're looking for something new, wait for the 6.


I absolutely LOVE two years of same body.. made it dirt cheap for 4/4s accessories, as the companies are guaranteed they have YEARS to sell them. We're spoiled for options! Case/accessory manufacturers simply cannot get behind any one Android phone in the same way. It's shrewd of Apple.. feeding the cottage industry they created & giving the consumers a HUGE benefit as well! There are only so many sizes/shapes you can make a phone, lol. I'm totally cool with iPhone having the same shell two years at a time & appreciate updated internals, sensors, cameras, etc...
Score: 12 Votes (Like | Disagree)
Read All Comments