The first reviews of the 2013 MacBook Air models are beginning to come out and, aside from new CPUs and a new SSD architecture, the biggest new feature is a dramatic increase in claimed battery life.

Apple has increased the battery capacity of the 13" MacBook Air from a 7.3V 6700mAh unit to a 7.6V 7150mAh battery. As a result, the claimed battery life of the 13" model has increased from 7 to 12 hours. In its review, Engadget found the 13" MBA achieved 12 hours and 51 minutes on a charge under their standard battery test. 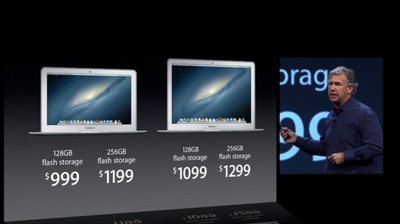 If that didn't impress you enough, there's one area where the performance has really gone off the charts, and that's battery life. Apple rates the 2013 edition of the MacBook Air for up to 10 hours of battery life playing video or 12 hours of wireless web surfing. Our standard rundown test, as it happens, also entails playing video and last year's machine managed just over six and a half hours before expiring. We were, then, skeptical that this new edition could manage nearly twice that longevity -- but it actually did better. This year's Air survived 12 hours and 51 minutes on a charge. That's a stunning number from a laptop this thin, achieved with WiFi enabled and without any external batteries.

Laptop Magazine's test unit achieved 10 hours and 53 minutes on a home Wi-Fi connection suggesting that, while mileage may vary, Apple's claims appear to be largely legitimate.

A review from Forbes found that the battery life would be somewhere between 8 and 9 hours under more strenuous use conditions. Competing 13" notebooks don't come close to reaching 12 hours of battery life without external batteries.

Apple says OS X Mavericks, when its released this fall, will include a number of battery-saving software features which could push the battery life of the new Air even further.

Other notes from the review confirm previous reports of significant increases in flash storage read/write. Engadget reported similar numbers for reads and writes to the new PCIe-based SSDs, while also saying boot time has decreased to 12 seconds from 18 seconds on the 2012 models.

Reviews also indicated substantial increases in both CPU and graphics performance on both benchmarks and real world tests. Laptop Magazine found the 13" MacBook Air returned 44.6 fps in a World of Warcraft test on 'good' settings, comparing favorably to similar Windows machines that returned between 30 and 33 fps in a similar setup.

MacsRgr8
So funny to read negative responses to the positive test results.
Score: 21 Votes (Like | Disagree)

It would be nice if this news post touched on the fact that multiple reviews are griping about the fact that Macbook Air development has largely stagnated; in addition to the aforementioned positives.

So in other words, other than the things that have changed, nothing has changed.

Yes, it's certainly a shame that MacRumors didn't explain that concept to us.
Score: 11 Votes (Like | Disagree)

comparing favorably to similar Windows machines that returned between 30 and 33 fps in a similar setup.

Those reviews really make you believe that GPUs are miraculous on Apple machines, which is a huge BS.
Score: 10 Votes (Like | Disagree)

GSPice
Someone please tell me when they think the next MBPr refresh will be. Then take my money.
Score: 8 Votes (Like | Disagree)

WilliamG
This is actually quite typical of Apple "on its good days." With the iPhone 5, it's making a fantastically smooth UI on comparatively lower power than competing Android handsets.

With the 2013 MacBook Air, it's great to see a focus on what most users care about: battery life! All modern Apple laptops are more than fast enough, so to have this kind of battery life is just fabulous.

I PRAY we see a similar thing happen with the new iPhones this year. I'd love doubled battery life, somehow...

Make it happen!
Score: 8 Votes (Like | Disagree)
Read All Comments