While iOS 7 and OS X Mavericks drew most of the attention at this week's Worldwide Developers Conference keynote, another one of Apple's introductions also generated a significant amount of discussion and controversy: redesigned AirPort Extreme and AirPort Time Capsule Wi-Fi base stations.

The new vertical designs take up considerably more volume than their predecessors, although footprints have been reduced to just 3.85 inches square. The new base stations include support for the latest 802.11ac Wi-Fi standard, and Apple has increased the number of antennas from three to six. The vertical design is intended to optimize range and signal strength by elevating the antennas, while also helping the base stations offer beamforming, which automatically finds 802.11ac devices and targets Wi-Fi signals toward those devices for optimum performance.

We free the top cover, only to find...3.5″ of empty space. While the AirPort Extreme doesn’t come equipped with storage, we dug up a standard 3.5″ SATA hard drive, just to test it out. Perfecto!...Except we can’t find any connectors where we’d plug in the hard drive, only empty spaces on the logic board—so chances of DIY AirPort Extreme to Time Capsule upgrades are slim. 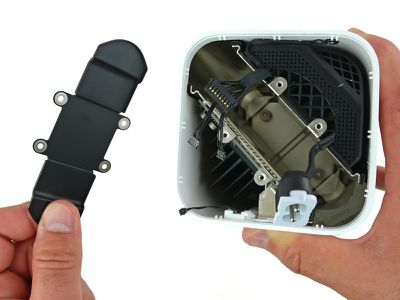 Looking further, iFixit found the usual array of chips on the logic board, and was also able to trace the antenna cable up through the center of the device to a large plate at the top which serves to distribute the Wi-Fi signals. And overall, iFixit gives the AirPort Extreme a repairability score of 8 out of 10, citing standard Torx screws, a relative lack of glue, and modular components as positives and slightly difficult prying to open, difficult fan access, and breakage-prone connectors as negatives.

Apple's new AirPort Extreme is priced at $199, while the AirPort Time Capsule base stations incorporating hard drives for wireless backup storage are priced at $299 for 2 TB and $399 for 3 TB.

napabar
Jeez, people! Do you not READ? The tower design is to help with the antennas and the 802.11 AC performance. Stop whining and READ!
Score: 41 Votes (Like | Disagree)

GermanyChris
Yea USB three is vitally important for printers and backup's while you sleep..
Score: 18 Votes (Like | Disagree)

No USB 3.0 because USB 2.0 is faster than the bandwidth of a wireless connection anyway.

Other manufactures are including USB 3.0 (5000Mbps) in their routers and charging less.
Score: 17 Votes (Like | Disagree)

rcp27
I bet I could fit a Raspberry Pi in there. Could make a nice little DIY NAS box.
Score: 16 Votes (Like | Disagree)

They really should have made a smaller profile design instead of wasting space with the Extreme version..


They did. It's called an Airport Express.
Score: 16 Votes (Like | Disagree)

I still don't know what to make of the new design...

I've got the current shape Extreme and it's classy, yet unobtrusive.

This design is perplexing.
Score: 11 Votes (Like | Disagree)
Read All Comments