With the introduction of its new Haswell-based MacBook Air models yesterday, Apple revealed a strong emphasis on battery life, pushing the rated operating time from five hours to nine hours on the 11-inch model and from seven hours to 12 hours on the 13-inch model.

Even with the focus on battery life, Apple was also able to bring some minor performance improvements, as seen in Geekbench 2 benchmarking results highlighted by Primate Labs. Overall, the new MacBook Air models performed 3-8% better than their previous-generation counterparts.

With Haswell, Intel's focus was on reducing power usage. Rather than improve performance by 25%, Intel improved performance by 10% while consuming 25% less power. 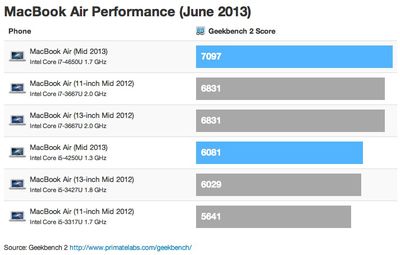 The new MacBook Air is available now through Apple's online store, although the company recommends waiting until tomorrow before trying to obtain one at any of its retail stores. Pricing begins at $999 for the 11-inch models, with the 13-inch models starting at $1099.

Ventilatedbrain
WHAT? No touch screen MBA ? Wheres the innovation ? Who cares about battery life?? thats it im moving to android .

I was hoping for a retina MacBook Air, but they announced this instead. I have even more reason to skip out on this model. I'll settle with the previous generation instead. :(

I was hoping for a retina MacBook Air, but they announced this instead. I have even more reason to skip out on this model. I'll settle with the previous generation instead. :(


The real reason to get this year's model is if you need longer battery life. 5 to 9 and 7 to 12 are huge differences. Close to double.

If you're always on the road, this is a no-brainer upgrade. For those who mainly use their laptops near power sources, there is no need to upgrade.
Score: 13 Votes (Like | Disagree)

WHAT? No touch screen MBA ? Wheres the innovation ? Who cares about battery life?? thats it im moving to android .

I do note your sarcasm.... these are typical Samsung troll comments that litter these boards.

This Samsung/Apple war is so much like politics, where the Samsung fans are trying to control the conversation by saying that nothing Apple can do is good. Samsung fans are playing the offensive, forcing Apple fans to play the defensive. It's working so far.
Score: 9 Votes (Like | Disagree)

JayCee842
I was hoping for a retina MacBook Air, but they announced this instead. I have even more reason to skip out on this model. I'll settle with the previous generation instead. :(
Score: 9 Votes (Like | Disagree)
Read All Comments