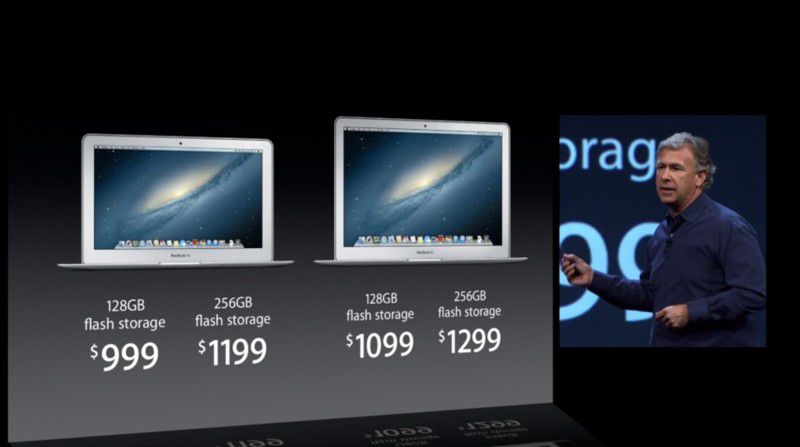 Very disappointed with such minor updates! :-(

Almost twice the battery life, almost twice the graphics power, and 802.11ac? I wouldn't call that necessarily minor. What were you expecting? Built-in coffee maker?

EDIT: For some reason I considered almost 50% being twice the graphics power; but nonetheless, quite the improvement! Especially compared to my Sandy Bridge GPU.
Rating: 32 Votes

Very disappointed with such minor updates! :-(


are you serious? this is one of the largest jumps in battery life i've ever seen.
Rating: 12 Votes

Saturn1217
So intel wasn't joking about the battery-life

Seriously this is one of the largest single generation jumps in battery-life we've ever seen and on Apple's ultraportable line where you need all the battery-life you can get. I was expecting 10hrs for the 13-inch and that was my optimistic guess. I'm a little disappointed that it appears 8gb is still only a BTO option but considering a redesign was not expected I think this update is fantastic.

Now I'm wondering if I should sell my current MBA while I can still get a good price or just stick with it since I just bought it 6-months ago...hmmm...

Also for all the retina whiners. The fact that apple just dropped the price (again) for the MBAs basically killed any hope of retina coming to this machine as it is currently branded. They will continue to make the rMBPs thinner and lighter and if you want retina buy those machines.
Rating: 12 Votes

Almost twice the battery life, almost twice the graphics power, and 802.11ac? I wouldn't call that necessarily minor. What were you expecting? Built-in coffee maker?


Twice the graphics power I don't think so and who is going to be using that 1GBps wireless connection anytime soon? I was truly looking forward to this and let's be honest it was a let down.
Rating: 9 Votes

What an anti climax.

We knew Haswell would be in, but that is it, better battery life.


that's all many of us wanted. look at the battery size differences between the classic and retina macbooks... it's an ultralight. if you want high-res get the 13" retina.

i don't understand the complaint - seems like a no brainer to me
Rating: 8 Votes

do you think there will be a BTO to upgrade the display to 1080p. This is very sad if it is still the old display resolutions. That is like so ancient by today's terms.

blabliblu
Wow that was the most disappointing announcement.

Battery is nice, but realistically relatively few people are away from power for more than 8 hours. Apple didn't do anything for that update it came free with the new processor. All updates were inline with expectations, hence this was a minor update.


On the contrary battery life is a huge deal. No one wants to have to tether up to an outlet during the day. That's the whole point of a laptop.
Rating: 6 Votes