With Apple's new 16 GB iPod touch becoming available today, the teardown experts at iFixit have taken the device apart in an effort to determine how it differs internally from its larger-capacity siblings. The 16 GB model lacks the rear camera and support for Apple's Loop wrist strap, so iFixit wanted to see how those changes affected the layout of the device's components. 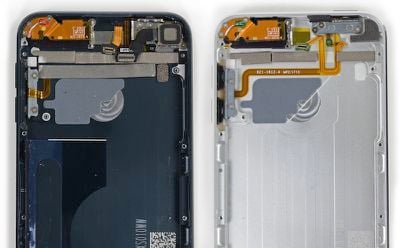 Comparison of original fifth-generation iPod touch (left) and new 16 GB model (right)
(Rear camera would be located at top right corner)
In the area of where the rear camera would be, the new iPod touch has a small void, while some of the flex cables have also been rerouted slightly. In addition, with the microphone no longer needing to be on the back of the device near a camera, it has been moved to the top edge of the device. Otherwise, the layout of components is the same as in other fifth-generation iPod touch models.

The logic board also appears nearly identical to the ones in the larger-capacity iPod touch models, housing all of the same chips with the exception of 16 GB of flash memory rather than 32 GB or 64 GB. The logic board also has a blank spot where the connector for the rear camera cable would have been.

With the exception of the flash memory, it appears that the ICs on the 16 GB model’s logic board are the same as those found on the 32 and 64 GB models:

Comparison of original fifth-generation iPod touch (left) and new 16 GB model (right)
(Post for wrist strap would be located at bottom right corner)
Finally, at the bottom of the device, the new iPod touch similarly contains a void where the post for attaching the Loop wrist strap would be. Apple has used the same speaker design as in the larger-capacity models, carrying a curved edge that wraps around the Loop post in those models.

Apple's new 16 GB iPod touch is priced at $229, with the addition allowing Apple to discontinue the fourth-generation iPod touch models it had continued selling at $199 (16 GB) and $249 (32 GB) alongside the more expensive fifth-generation models introduced late last year.

i'll be getting one for sure. Not even sure i need it...

I was having a hell of a time yesterday.

I decided I wanted an iPod touch. (I haven't been in the market for them for several years, but I vaguely know about the present models).

So I go on Ebay and do a search for 5th gen models. Fine, nothing unusual there. I then go to Amazon, where i started getting into trouble.

They had listings for 4th gen models they called (current) and 5th gen they call (newest). Yikes! no biggie though, i'll just go to Apple and check models.

Well, I go to the Apple site and they have a 16GB model on the front page as 'New' . At this point i'm totally lost, I haven't a clue.

By the time I figure out what is what i've lost interest.

Thank you Apple for saving me money.


Um, not Apple's fault at all... don't blame them. Your first mistake is relying on eBay and Amazon for correct descriptions. Why didn't you start on Apple's site first? Second, seeing you've been on MacRumors since 2006 you should know there's a special tab just for the current models of every Apple product and info about when you should and shouldn't buy them. See their Buyer's Guide (https://buyersguide.macrumors.com/#iPod_Touch).

Also for future reference, MacTracker (http://mactracker.ca) is a great source to find out about the history and tech details about every Apple product ever made. ;)

furi0usbee
Seems dumb to me remove the camera, especially when everyone uses these devices now as a main camera. In terms of quality of products, I don't know why Apple would want to make a product less functional on purpose. Is this a case of removing the backlit keyboard in the Air, then hearing it from the customers, then putting backlit keys back in?

Any money Apple could save by removing a cheap camera seems to not even make a dent in their profits, so this move is strange. Do they plan on taking the camera out of the low-end iPhone as well?

Now I'm not confident in a retina display for my iPad mini...

mac jones
I was having a hell of a time yesterday.

I decided I wanted an iPod touch. (I haven't been in the market for them for several years, but I vaguely know about the present models).

So I go on Ebay and do a search for 5th gen models. Fine, nothing unusual there. I then go to Amazon, where i started getting into trouble.

They had listings for 4th gen models they called (current) and 5th gen they call (newest). Yikes! no biggie though, i'll just go to Apple and check models.

Well, I go to the Apple site and they have a 16GB model on the front page as 'New' . At this point i'm totally lost, I haven't a clue.

By the time I figure out what is what i've lost interest.

Thank you Apple for saving me money.
Score: 12 Votes (Like | Disagree)

Baklava
This iPod seems to be a sneak peek to the low-cost iPhone.
Score: 9 Votes (Like | Disagree)


Go mow your neighbors lawn tomorrow for the extra 30$. Or wash your mom's car.
Score: 6 Votes (Like | Disagree)
Read All Comments