As part of its first quarter earnings release today, T-Mobile USA revealed that its iPhone 5 sales stand at approximately 500,000 units less than a month after the device debuted on the carrier. The carrier also launched the iPhone 4 and 4S in limited markets where the devices are compatible with its networks, but T-Mobile did not specify how many units of those models it has sold.

"Our first quarter operating metrics and financial results are showing positive impact from the changes we began making in the fourth quarter. Branded customer net additions turned positive for the first time since the first quarter of 2009 and our postpaid business has demonstrated significant improvement," said John Legere, President & CEO of T-Mobile. "We ended the quarter with strong operational momentum, which is continuing into the second quarter, driven by the successful launch of our Un-carrier "Simple Choice" service plan and the introduction of the iPhone into our device line-up. Things only get more exciting from here, having brought T-Mobile USA and MetroPCS together to create the wireless industry's value leader and premier challenger."

T-Mobile also announced that success with its Bring Your Own Device campaign continued during the first quarter, adding 100,000 iPhones per month from customers switching to the carrier even before it officially began offering the iPhone. 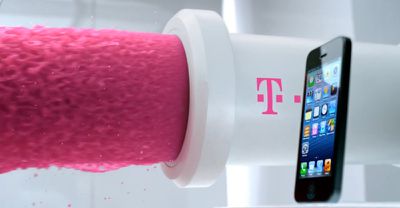 Whats the deal with that pink stuff coming out of the pipe? :confused:


I think T-mobile is teaming up with McDonalds.
Score: 9 Votes (Like | Disagree)

Honestly. It is really dumb for some to be putting off an iPhone purchase right now to wait for a new iPhone model to be released in about 5 months.

I agree, if you can wait 5 months you might as well wait 6 months, no make that 8, why not a year? Extending that logic further you might as well wait another year and then hell another after that, never ever buying a new iPhone because the new one is right around the corner. And by that I mean one more orbit of the earth around the sun. The new iPhone is technically always, right around the corner. Stay thirsty my friend.
Score: 8 Votes (Like | Disagree)

"The reports of my [iPhones] death have been greatly exaggerated" - Mark Twain.
Score: 8 Votes (Like | Disagree)

nfl46
Not bad at all considering we are so close to the iPhone 5S, and most are aware of it.
Score: 7 Votes (Like | Disagree)

ToomeyND
Is that a picture of the t-mobile shareholders' collective "response" to selling the iPhone?
Score: 6 Votes (Like | Disagree)

Honestly 500K seems low to me when the iPhone sells millions and millions of units a month.


T-Mobile isn't as big of a carrier as Verizon or AT&T.
Score: 5 Votes (Like | Disagree)
Read All Comments