Originally announced in February, XCOM: Enemy Unknown for Mac comes packaged as part of a special Elite Edition, which includes additional add-on content like the Slingshot Pack, the Elite Soldier Pack, the Second Wave update and the game's soundtrack. 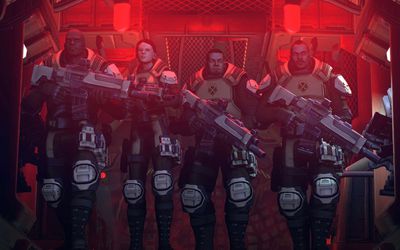 XCOM: Enemy Unknown is a re-imagined version of the 1994 classic X-Com: UFO Defense. In the game, players will lead a secret government organization to defend the world against aliens, overseeing base management and engaging in combat.

-Command XCOM's soldiers in tense turn-based battles where each decision could be the difference between game-changing gains or devastating losses for humanity.

-Recruit, customize and equip an elite squad, then upgrade each soldier's unique skills and abilities as they gain experience in the field.

-Recover artifacts from battle and use them to research and build powerful technologies that can be turned against the invaders.

-Mix and match aliens and soldiers to create powerful squads in LAN and online multiplayer.

XCOM: Enemy Unknown - Elite Edition can be downloaded for $49.99 from the Mac App Store. [Direct Link]

And....it is cheaper on Steam and will probably go on sale for less. It just needs SteamPlay now.


It seems the App Store version includes the DLC which is $12 on Steam, so it's actually technically cheaper on Mac.

However, sales will certainly mean it'll be cheaper on Steam at some point.
Score: 2 Votes (Like | Disagree)

mrxak
This game is so good. Very disappointed it's not on Steam for Mac, but oh well. If you haven't already bought it, and you don't find yourself booting into windows very often, I highly recommend picking this up now for the Mac.
Score: 1 Votes (Like | Disagree)

It seems the App Store version includes the DLC which is $12 on Steam, so it's actually technically cheaper on Mac.

However, sales will certainly mean it'll be cheaper on Steam at some point.


Plus Steam games give you the Windows version (and vise versa) for free, assuming they're allowed to carry it. I just bought Dragon Age Origins Ultimate on Steam for a little over $7, but the Mac version is nowhere to be found on there. It's still $30 elsewhere and you don't get the Windows version with it either for that price.
Score: 1 Votes (Like | Disagree)

Cougarcat
You can grab Feral games on sale, you just have to be a bit patient. They recently discounted all their Total War games by 50%. (Or sometimes not––I nabbed Arkham City on Amazon for $15 in December, not long after it came out.)

Unfortunately it's not coming to Steam, which means no online Mac-PC multiplayer, so I'll probably grab the PC version the next time it's cheap.Oh well.
Score: 1 Votes (Like | Disagree)

RichTF
Ah man, I remember playing this years ago on my Amiga! Fond memories, can't wait to play this version on my Mac. Even if it means missing out on sale prices... :o
Score: 1 Votes (Like | Disagree)

phixionalninja
Does anybody know if the Mac version will come to Steam? I got it free for PC with Bioshock Infinite, and I'd much rather install it under OSX.
Score: 1 Votes (Like | Disagree)
Read All Comments

Thursday September 29, 2022 12:38 pm PDT by Juli Clover
Tony Blevins, Apple's vice president of procurement, is set to depart the company after he made a crude comment about his profession in a recent TikTok video, reports Bloomberg. Blevins was in a video by TikTok creator Daniel Mac, who was doing a series on the jobs of people he spotted with expensive cars. After seeing Blevins in an expensive Mercedes-Benz SLR McLaren, Mac asked Blevins what ...
Read Full Article • 629 comments

Thursday September 29, 2022 7:26 am PDT by Sami Fathi
Speaking at Università Degli Studi di Napoli Federico II in Naples, Italy, Apple CEO Tim Cook said that not too long from today, people will wonder how they led a life without augmented reality, stressing the "profound" impact it will have on the not so distant future. At the university, Cook was awarded an Honorary Degree in Innovation and International Management and also sat down for a...
Read Full Article • 357 comments