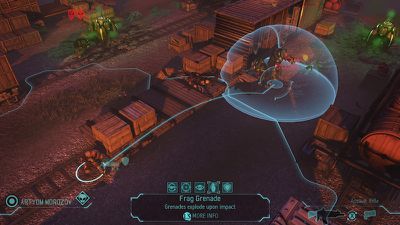 XCOM: Enemy Unknown, a re-imagining of 1994's classic strategy game "X-COM: UFO Defense", was developed by Firaxis and published by 2K Games for PC and consoles.

In the game, players lead secret government organization XCOM to defend the world against aliens. Players oversee base management in addition to combat strategies while maintaining relationships with countries to fund their organization and save the world.


Although there are no pricing, system requirements or multiplayer details at the moment, Feral says that they will be revealed as the release date draws closer.
46 comments

Hmm, why does not being on Steam make you not interested? I mean, I use Steam, but it's really just a convenience.

I have games on Steam that I bought OVER ten years ago, before Steam was even a thing. I can download those to any computer that I own or have access to and play any time I want. I don't have to worry about keeping copies in case the company goes out of business or they decide to no longer maintain their content servers. I don't have to worry about keeping activation keys, etc.

With Steam, I can install a game, play it for three days, delete the game when I need the space two weeks later, then eight months later, when I have a hankering to play some video games (on a new machine no less), I can load up my Steam library and play that game.

If this were on the Mac App store, I would consider it but I pretty much don't deal with games that aren't on Steam.
Score: 5 Votes (Like | Disagree)

I'm probably going to buy this again like a sucker, because I bought the Windows version on Steam to run in Basecamp.

NMF
Yeah, Valve basically prints money. They also don't need to answer to shareholders, so they tend to have extremely consumer-friendly policies. If they ever went under they'd make your games available to download one last time. That's safe to assume. Feral's website? Not so safe.

Valve is the undisputed king. Steam is the Michael Jordan of being Michael Jordan. Bow down and swear fealty to our Lord and Savior Gaben, for most righteous and knife-possessing is he. Repent your transgressions against The Beard lest you be forced into Origin-only bondage for the rest of your days. For he is the Truth, the Light and the Way; the salvation of mankind and the protector of all things queso. Behold.
Score: 2 Votes (Like | Disagree)

I'm probably going to buy this again like a sucker, because I bought the Windows version on Steam to run in Basecamp and it's NEVER been able to run for more than 4 or 5 minutes without hard crashing the entire computer.

Apparently you can "patch your bios" to correct this. ARG.


Seriously. Why couldn't they have gotten Aspyr?