Among Apple's granted patents released today, AppleInsider has noted a pair of inventions that appear to be of some interest. The first patent addresses the idea of offline iTunes Store purchases from mobile devices, allowing users to store "credit" that can unlock content already on their devices but not yet owned by the user.

To complete a media item purchase without sending transaction information to the media store, the electronic device can store pre-paid credits locally on the device. The pre-paid credits can be purchased in advance, for example when the device is connected to the store. In response to a user request to purchase a particular recommended media item, the electronic device can deduct the cost of the recommended media item from the locally stored credit, and remove the access restrictions of the device. The amount of credit remaining can be communicated to the store or to a host device (e.g., used to manage the user's media library) when communications become available.

The difficult part of this scenario involves getting the content onto the user's device, and Apple's patent addresses several methods, including manual loading of files either from the Internet before going offline or from other storage devices. Alternatively, the user's device could automatically pre-download content based on Genius-like recommendations or other criteria and offer the content for on-device purchase. 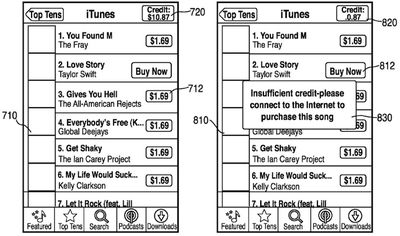 While Wi-Fi hotspots have become increasingly common to allow iPod touch or Wi-Fi iPad owners to connect to the Internet with some level of regularity, it appears that Apple is still interested in exploring ways to allow users to unlock new media content even when not connected to the Internet.

The second patent describes a proximity-based method for transferring files between devices, such as a computer and a mobile device. While a number of existing solutions such as Bump and Samsung's S Beam allow for such actions, Apple's patent includes a contextual aspect that allows for very specific transfer scenarios to simplify the user experience.

In one simple example outlined by Apple, a user composing an email on his or her Mac wishes to add an image from their phone. Under the proposed method, the user could select the insertion location in the email, use a contextual menu to invoke an insertion option, bring up the desired image on their phone, and then bring the phone in close proximity to the Mac.

Using a combination of proximity and communication technologies such as Bluetooth, near field communication (NFC) technology, Wi-Fi, and or a webcam, the image could then be automatically and wirelessly transferred to the computer and inserted into the email at the proper location.

babyj
How is any of that patentable? They're just specific use cases based on ideas and technologies that already exist and are already in use.
Score: 9 Votes (Like | Disagree)

What do you want to imply? Samsung invented proximity based sharing?


No, what he means is that just adding a twist on existing major functionality that is already part of current implementation is not something that SHOULD be patentable. But of course, it was. :rolleyes:

I don't blame Apple - I blame the ridiculous patent system for granting these types of patents.

bernuli
Great, fill up our had drives wih low bitrate crap we don't even own. I'll be skipping THAT version of iTunes.
Score: 4 Votes (Like | Disagree)