Avid today announced new versions of its flagship video editing and audio production applications Media Composer 7 and Pro Tools 11, as well as two new Mac- and iOS- compatible hardware interfaces for recording audio at home or on the road.

In addition to a number of new features, Media Composer 7 receives a significant price cut, bringing the standard edition to $1000, down from $2500. It will be available in June.

ProTools 11, which Avid says "represents a quantum leap in creative power", gains a redesigned audio engine and 64-bit architecture. The standard edition of Pro Tools 11 is available for $700, with upgrades ranging from $300 to $500 depending on which previous version of Pro Tools is owned. The new version should be available later this quarter. 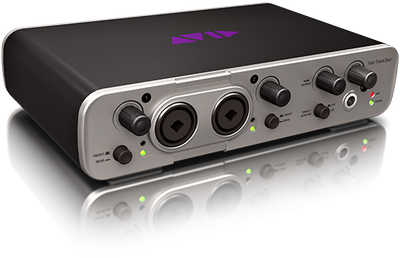 The Avid Fast Track Solo and Duo include Pro Tools Express for recording and editing audio on a Mac, and also connect directly to the 30-pin connector on older iOS-hardware, and to newer iOS devices via the 30-Pin to Lightning adapter.

"Today’s aspiring songwriters and musicians want a high-quality, affordable recording solution that’s portable enough to let them create wherever they are," said Dana Ruzicka, vice president of Segment and Product Marketing at Avid. "Providing access to the industry-standard Pro Tools family, Fast Track Solo and Duo deliver this capability like nothing else on the market today."

The Fast Track Solo and Duo are available now for $180 and $300 respectively.

Icaras
So we now have Digital Performer 8, Ableton Live 9, and Pro Tools 11...

ronwasserman
At last! Now if Apple (hopefully) has a new Mac Pro around the same time I'll be set!
Score: 4 Votes (Like | Disagree)

MRU
Great, now come on Apple give us some Logic Pro love too. Pretty please....


(Those ProTools 11 licences are damn pricy even for upgrade of ProTools 10)
Score: 4 Votes (Like | Disagree)

to newer iOS devices via the 30-Pin to Lightning adapter

Avid is a bit late to the game with this. There are several other iOS audio options with more to offer. Avid should have gone with native Lightning support to differentiate themselves from the competition.
Score: 3 Votes (Like | Disagree)

ivanozerov
I don't care that my old TDM cards are dead with this version.

I don't mind waiting for updates for some of my favorite plugins.

I have a stiffy under the desk at work just thinking about it.
Score: 3 Votes (Like | Disagree)

Poisednoise
I'm not a Pro-Tools user, but to be honest given the way they've treated users of their other software (Sibelius specifically) I wouldn't throw any more money at upgrades to anything Avid still owns at this stage.
Score: 2 Votes (Like | Disagree)
Read All Comments

Tuesday August 3, 2021 7:34 am PDT by Joe Rossignol
Apple today began offering new high-end graphics upgrade options for both the tower and rack versions of the Mac Pro desktop computer. This comes on the same day that Apple started selling the Magic Keyboard with Touch ID on a standalone basis. As noted by CNN Underscored's Jake Krol, the Mac Pro can now be configured with new AMD Radeon Pro W6800X, W6800X Duo, or W6900X graphics when...
Read Full Article • 122 comments