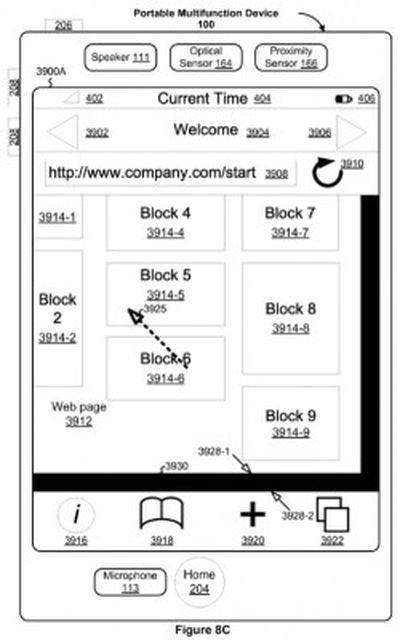 Last October, a court filing in the U.S. lawsuit between Apple and Samsung revealed that the U.S. Patent and Trademark Office (USPTO) had issued a preliminary decision ruling that all of 20 claims of Apple's "rubber banding" patent were invalid.

The patent, which addresses the ability for content displayed on iOS devices to "bounce back" when the user scrolls to the top or bottom of the page, had been successfully used by Apple in its lawsuit against Samsung that yielded a $1 billion judgment.

At the time, we noted that the decision by the USPTO was merely a preliminary one and that it would be revisited in numerous other reviews and appeals as Apple continued to plead its case. FOSS Patents now notes that Samsung has filed another court document revealing that the agency has followed up with a new decision reviving three claims from Apple's patent but once again rejecting the other 17 claims, including the key one used against Samsung.

The latest decision, which according to Samsung was published by the patent office "on or after March 29", is a final Office action -- which gives it more weight than the first one, but "final" isn't really final in this process as I'll discuss further below. [...]

Apple now has two months (which can be extended) to respond. Again, the word "final" sounds more definitive than this really is. Sometimes the Central Reexamination Unit reconsiders such "final" decisions. Even if it doesn't, this "final" rejection can and certainly will be appealed to the Patent Trial and Appeal Board (PTAB), sort of an appellate division within the USPTO. The PTAB can make a final decision as far as the USPTO is concerned, but frequently remands a matter to the Central Reexamination Unit. And a final-final USPTO decision can then be appealed to the United States Court of Appeals for the Federal Circuit. It will take years before a truly final decision on the validity of this patent issues.

The validity of the rubber banding patent is just one of the difficulties facing Apple as the $1 billion verdict against Samsung continues to be challenged. Last month, Judge Lucy Koh voided nearly half of the judgment due to a jury error that made it impossible for corrected damages to be calculated for the affected devices and patents. As a result, Koh ruled that a new trial must be held to establish correct damages for those devices, with the result potentially including either a smaller or larger award for Apple. Samsung is of course also seeking to appeal the judgment in its entirety, with Apple and Samsung arguing over whether the appeal or the new trial addressing corrected damages should proceed first.

So who made a product even close to an iPhone before Apple? Who implemented and used rubber-banding before Apple? Apple invented the competition when it invented iPhone. Samsung, Motorola, Nokia would all still be pushing their stupid flip phones and Palm would be on another useless iteration of its Treo if it weren't for Apple.

Ah how quickly we forget that the things you take for granted today in your smartphone were mostly invented, and implemented, by Apple. But today you say it's normal and everywhere, but that wasn't the case just five years ago. Credit the Apple. They took the risks, they made the investments, and they deserve to block anyone who has stolen their concepts.


Rubber banding was done on AOL and Amiga Computers.

Those manufacturers already had touch screen phones on their roadmap. Apple was one of the first and had a great UI despite the phone lacking in several other areas.

Most of the things you credit Apple for, Apple stood on the hard work of the industry. You want to thank Apple for it? Ok - But in the very same sentence and breath - thank the Samsungs, Motorolas, Nokias, Palms, etc for all of their $$, R&D, patents, etc which made the iPhone possible.

I thought the Patent Office was there to protect US companies not sell then out to the Asians?


Then you have thought wrong.
Score: 14 Votes (Like | Disagree)

Nightarchaon
And apples stock falls again as another of its "key patents" fails to stick.

i remember a time when apples products stood out from the competitors, and they released new, fresh improvements that were one step ahead of the competition, now it seems everyone else is 10 steps ahead and apple are stuck in the corner eating paste with glitter on it.

Less of Sir Ives -"lets make it thinner and shiny-er", more technical enhancements and disruptive new features, please apple (including a little door that gives the magical ability to swap out the memory and HDD on your products again, THAT would be a disruptive change)
Score: 14 Votes (Like | Disagree)

clearly touchscreen and multitouch concept was conceive before the iPhone launch. but the rubber band thingy, that is definitely Apple.


the rubber band thing used to happen in Amiga OS 3.1 (maybe even earlier) when you scrolled to the bottom of a window in some software, its been around for years
Score: 13 Votes (Like | Disagree)
Read All Comments