Over the weekend, Patently Apple reported that the U.S. Patent and Trademark Office had refused Apple's trademark application for the term "iPad mini". While some such as The Verge's Nilay Patel were quick to note that the refusal was simply a first office action that is nowhere near final, the refusal does offer an interesting glimpse into the thinking of patent examiners.

The examiner's primary objection to Apple's application takes the view that the term is "merely descriptive" rather than creating a unique brand name that is worthy of protection. The examiner argues that all elements of the name, including "i", "Pad", and "mini" are not unique to the product being named.

The term “IPAD” is descriptive when applied to applicant’s goods because the prefix “I” denotes “internet.” According to the attached evidence, the letter “i” or “I” used as a prefix and would be understood by the purchasing public to refer to the Internet when used in relation to Internet-related products or services. [...]

The term “PAD” is also descriptive of the applied for goods. The term “pad” refers to a “pad computer” or “internet pad device”, terms used synonymously to refer to tablet computers, or “a complete computer contained in a touch screen.” [...]

The term “MINI” in the applied for mark is also descriptive of a feature of applicant’s product.Specifically, the attached evidence shows this wording means “something that is distinctively smaller than other members of its type or class”.

The examiner goes on to suggest a means by which Apple could argue for uniqueness, noting that the company would have to specifically claim that its existing "iPad" trademark has acquired distinctiveness. This would appear to be a trivial argument for Apple to make, but it seems that it did not do so in its initial "iPad mini" application.

The examiner also notes that Apple should include a disclaimer noting that it is only attempting to claim a trademark on "mini" when used as part of the entire "iPad mini" term, as other companies should be permitted to use the descriptive term "mini" for their own products.

As a secondary objection, the patent examiner ruled that Apple's specimen submitted with the application was insufficient to prove that it was for a product being offered for sale. Apple's specimen showed the iPad mini overview page as it appeared at launch last year, with the examiner arguing that the "iPad mini" text and the "Buy Now" button were not in close enough proximity.

The mark and picture of the goods on the specimen are not sufficiently proximate to the “buy now” tab, and it is thus unclear what consumers would be purchasing by clicking on this tab. 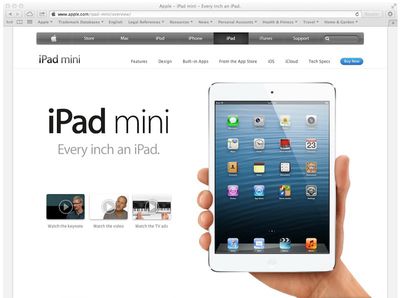 Apple's "iPad mini" trademark specimen
As with the prior objection, the examiner in this case offers Apple several means to rectify this issue, including using an alternative specimen that more clearly shows the item is being offered for sale as of the date being claimed in the application, or a shift to an "intent to use" application that requires no initial specimen and instead requires that Apple simply show that at some later date it did indeed offer the item for sale.
Related Roundup: iPad mini
Buyer's Guide: iPad Mini (Neutral)
Related Forum: iPad
[ 83 comments ]

Peace
Is this examiner crazy or what ?

I'm baffled. The buy button isn't close enough and the consumer wouldn't know what they were buying ?

kayloh20
As weird as it sounds, I kind of understand the examiner's points about the iPad mini name...but his or her point about the "buy now" button is essentially calling consumers idiots.
Score: 9 Votes (Like | Disagree)

Dulcimer
The patent examiner's explanations for the "i," "Pad," and "mini" trademarks are hilarious!
Score: 8 Votes (Like | Disagree)

For I and pad yes. Particularly since i=internet was an Apple 'invention'.

The "i" prefix was NOT an Apple invention. Apple's ad agency was simply following the popular trend of the time.

We've been over this many times before. Reference my post showing dozens of "i" device trademarks that predated Apple's usage:

As for "pad" computer, that's an old term just like "slate".

This application should be able to go through after Apple makes the changes that the examiner asked for, such as denying any claim to the word "mini" by itself.

It's basically the same sequence Apple went through when applying for "App Store". They were first denied because they used common descriptive words, same as in this case.

Then they came back and re-applied on the grounds of "Acquired Distinctiveness", and provisionally got it. (Microsoft filed an opposition, and it's all still pending.)
Score: 7 Votes (Like | Disagree)

the prefix "I" denotes "internet." According to the attached evidence, the letter "i" or "I" used as a prefix and would be understood by the purchasing public to refer to the Internet when used in relation to Internet-related products or services. [...]

The lower case "i" prefix has denoted Intel micro-controllers since the 1970's... when referring to technology products. 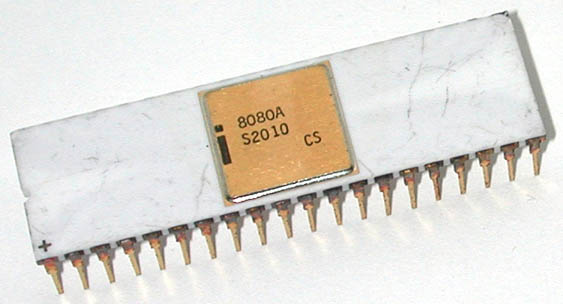