Twitter has released a significant update to its TweetDeck Mac App, adding features like improved filters, new font sizes, and the advanced search tools that were originally added to the Chrome application in December.

Column filters, which have long been a part of the TweetDeck Web app, are a new addition to the Mac version, along with tools for filtering columns by content and users. 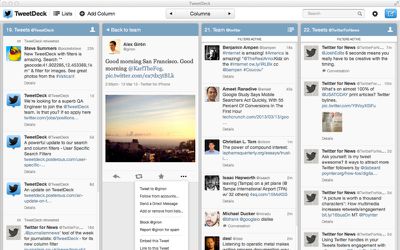 In early March, Twitter announced that it was ending support for TweetDeck for iPhone, Android, and TweetDeck AIR, focusing instead on its TweetDeck Web app and Google Chrome apps, along with its native Mac and PC apps.

TweetDeck for Mac is a free download from the Mac App Store. [Direct Link]

tekboi
The original one was still better by a long shot.
Score: 2 Votes (Like | Disagree)

ipedro
I run social media programs for a few brands and this app has been amazing. I keep it in full screen on a 27" iMac where I can monitor everything happening all at once with just a glance.

However, a glaring absence is that of trends. What if I want to monitor Twitter trends? There's no column for trending topics, only the ability to see what is trending and then follow a single trend. The data is already being collected and served in the app, but the app doesn't allow it to be displayed in a dynamic column. What gives?
Score: 1 Votes (Like | Disagree)

Andy-V
Is the app just the web version loaded in a frame? Looks like it may be.
Score: 1 Votes (Like | Disagree)
Read All Comments