As posted on the company's website, the lawsuit involves multiple Apple products, including the iPhone, iPad, Mac computers and laptops, Apple TV and Apple services like iTunes, iCloud, and the App Store.

"Apple makes many great products that use Intertrust's inventions," said Talal Shamoon, Intertrust's chief executive officer. "Our patents are foundational to modern Internet security and trusted computing, and result from years of internal research and development. We are proud of our record of peaceful and constructive licensing with industry leaders. We find it regrettable that we are forced to seek Court assistance to resolve this matter."

Intertrust, which is backed by Sony Corp. and Royal Philips Electronics NV, successfully collected $440 million from Microsoft in 2004 after winning a patent infringement case against the company. On its licensees page, Intertrust lists major tech companies like Adobe, Samsung, Panasonic, LG, HTC, Nokia, and Motorola.

Karma is a b1tch!

camnchar
This sort of thing really shows the broken nature of the software patent system. If Apple stole code, then they need to pay up. Vastly more probable, though, is that Apple wrote original code that does similar things to what Intertrust claims their code does. That's kind of like inventing a new alternative to the cotton gin, which itself should be patentable, but then getting sued by Eli Whitney because he came up with the idea of a cotton gin.

And around and around we go.
Score: 11 Votes (Like | Disagree)

nepalisherpa
Karma is a bitch!
Score: 10 Votes (Like | Disagree) 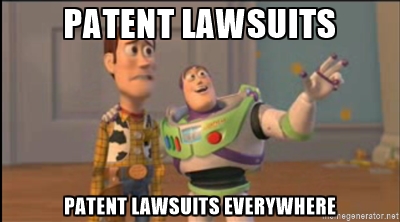 Monday June 21, 2021 7:17 am PDT by Hartley Charlton
Users appear to be underwhelmed by Apple's upcoming iOS 15 and iPadOS 15 updates, according to the findings of a new survey by SellCell. The survey asked 3,000 iPhone and iPad users, evenly split between men and women, aged 18 or over in the United States, what they thought of iOS 15, iPadOS 15, and the naming of the upcoming iPhone 13 lineup. Over 50 percent of all of the survey's...
Read Full Article • 334 comments