Apple has updated its iOS Maps application with Flyover support or expanded Flyover coverage in a number of cities around the world, and updated 3D buildings and turn-by-turn navigation for a number more, reports The Loop. Apple recently pushed significant updates for Maps users in Japan.

Apple also made a number of updates in China, one of the company’s newest and biggest markets. Maps in China now has a new coloring scheme that matches the vector-based Maps; new Chinese character font for improved readability; Re-prioritized locations so more relevant/interesting locations display first; Updated road network; and it now contains narrower roads.

In addition to all of these changes, Apple has updated city labels in cities worldwide and improved satellite imagery in a number of countries. Other updates include location information for Apple Stores, businesses, movie theaters, restaurants, airports and transit stops.

The Loop has the full list of cities seeing improvements, noting that Apple CEO Tim Cook said the company has been working hard on fixing the issues with Apple Maps.

My street gained Flyover, but it stops short of my house. I'm still stuck in flatland! Down the road, my neighbors' doghouses are in 3D.

It got dog slow in the last hour, too--I blame MR for making the whole world look at their house at the same moment.

Many people have spent a long time reporting these errors to Apple and it seems rather than fixing basic data errors they have spent their time on creating fly over cities which, lets be honest, are a poor alternative to street view.

I've seen some of my errors reported fixed within a week or two. Others, still unfixed after months. Many, I know, are errors served up by partners like Yelp.com, so Apple in theory must be passing reports on to those partners. They must be prioritizing and automating how they deal with the flood of reports, and I'm sure they face some learning curve.

Luckily, I've never seen a major error--mainly just businesses pinned a hundred feet off of their actual building. (I'm in the US. I know some areas are better than others.)

One thing I know: the people flying the Flyover planes are NOT the same people who "fix basic data errors." Apple has people to maintain both efforts at once :)

P.S. Imagine if Apple made Street View. Imagine the HOWLS of rage and mockery at the blurred-out unreadable signs, massive lens flares, cars cut in half, and whole scenes lost in shadow. Bloggers would be posting screenshots daily of errors we just give Google a free pass on. (Likewise, we always gave Google a free pass for wrong addresses, which were and still are frequent... but with an Apple logo, the same type of error is a war crime!) Street View is useful to me once or twice a month, and it was a really cool idea, but it's a mess in its own right.

Meanwhile the level of detail in Flyover is enough to be useful. It doesn't show readable signs the way Google (1/3 of the time) does, but it gives you the look of the street and the buildings VERY clearly.

And unlike Street View, you don't have to maddeningly and awkwardly jump node to node to node. You can zip around smoothly and not lose your bearings. Fly a mile or a meter with a flick. Try realizing you're on the wrong block in Street View and going a block down the street--it's so slow and finicky that it's basically useless. You have to use regular map view for that jump and then return to Street View. Google's solution is decent if you already know EXACTLY the spot you want to see. Not so good for exploring your way around. Plus, Street View has very little that isn't a... street! Flyover lets me cross through woods, parks, public squares, footpaths, private drives/complexes, etc.

Of the two (both flawed, both gimmicky) features, I'll take Flyover. (And of course, I still have Google Maps and Street View as well when I want them.)
Score: 9 Votes (Like | Disagree)

Rogifan
Guess I need to inform Apple that the Minnesota Twins no longer play at the Metrodome. :rolleyes: 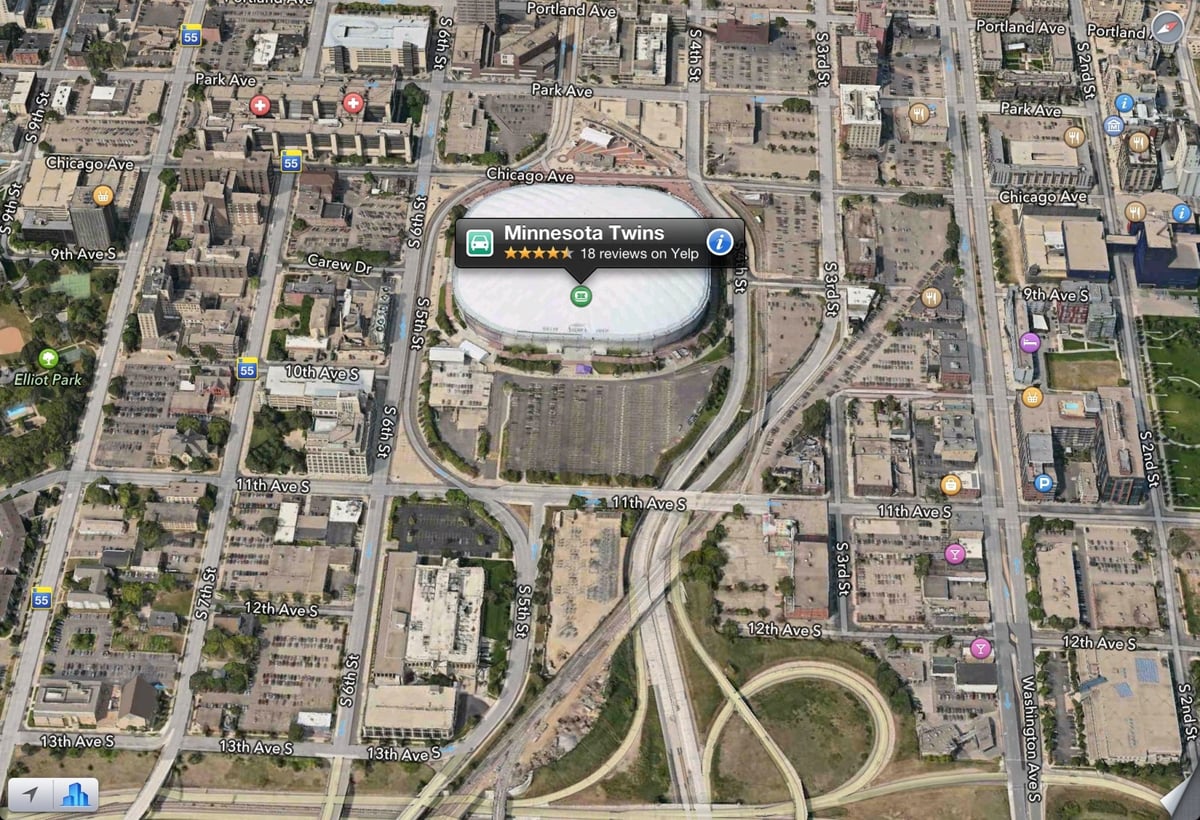 Jadzea
To be honest, who cares about flyover when the information in Apple maps is so woefully incorrect.

In the UK POI data is out of date by 10 years (our price records is listed in Leicester still!) and the address information is poor. We have a road nearby that is listed as being in a town 100 miles away!

Many people have spent a long time reporting these errors to Apple and it seems rather than fixing basic data errors they have spent their time on creating fly over cities which, lets be honest, are a poor alternative to street view.
Score: 9 Votes (Like | Disagree)

Bathplug
Flyover is pointless unless your Spider-Man. Bring back street view.
Score: 9 Votes (Like | Disagree)


>somehow mistook MacRumors for 4chan
>did not die in a fire
Score: 8 Votes (Like | Disagree)

You're correct. A map problem with a simple spelling error that I reported in October hasn't been fixed. I've submitted many updates to Google Maps also. Usually within a few days I get a "You were right!" email from Google.

They're probably completely overwhelmed with the volume of corrections being sent over the past few months. It's bound to take a while to integrate them all.

Also, for those complaining that they're working on 3D flyovers but not fixing basic errors -- the programmers doing 3D renders are obviously not the same programmers who are fixing map data.
Score: 7 Votes (Like | Disagree)
Read All Comments