Sales of the iPad mini are cannibalizing sales of the iPad, according to a report from NPD DisplaySearch. January shipments of tablet panels between 7 and 9 inches eclipsed shipments of larger panels, indicating an unexpected shift in consumer preference for a smaller form factor tablet. 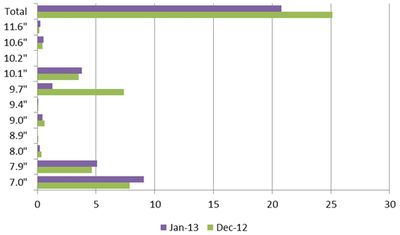 In December, NPD estimated that Apple would sell 40 million iPads minis and 60 million iPads during 2013, but the January sales numbers suggest that the mini will outsell the iPad.

For much of December and January, the iPad mini was in short supply due to low yield rates of the mini's display panels, with shipping times up to a week. Apple finally reached supply-demand balance earlier this month, which will facilitate even greater sales of the smaller tablet.

Cannibilization is a huge opportunity for us. We never fear it because if we do, someone else will do it. iPhone has cannibalized iPod, that doesn't worry us. iPad has on the Mac, and that doesn't concern us.

Currently, the full-sized iPad is an attractive choice because of its Retina display, but Apple is rumored to be releasing a second generation iPad mini with Retina later this year.

gmanist1000
People will buy whatever is cheaper. If they have to settle for a smaller screen, they will.
Score: 20 Votes (Like | Disagree)

camnchar
When it was first announced, I thought Apple was crazy to price it at $329. Clearly I was wrong.
Score: 19 Votes (Like | Disagree)

make it lighter, then full size iPad and Mini will split the share.

For longer period of use I go with iPad 4 and for games and simpler stuff i use the iPad mini.
Score: 14 Votes (Like | Disagree)

samcraig
Better for Apple to cannibalize itself vs another company to take their business away. Which was bound to happen if Apple didn't put out something less expensive and smaller to compete.
Score: 4 Votes (Like | Disagree)
Read All Comments