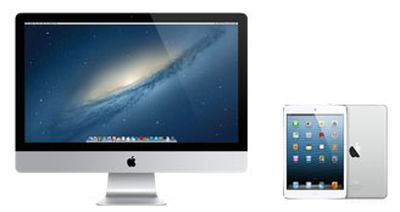 DigiTimes reports that shipments of both the iPad mini and iMac are expected to be constrained throughout 2012. In both cases, display production appears to be the limiting factor.

For the iPad mini, the panels have reportedly seen low yield rates, especially from one of Apple's suppliers. As a result, Apple may only reach 6 million of an estimated 10 million target for iPad mini shipments in the fourth quarter of 2012.

Meanwhile, the newly announced iMacs will also see constrained supplies due to issues with iMac panels from LGD.

Additionally, the sources said new iMac models use panels sourced only from LGD. The company has had to develop a new production process for mass producing the iMac panels and has limited capacity, which is delaying shipments.

Yields of both products aren't expected to reach target goals until the first quarter of 2013.

Apple just announced that the new iMac would go on sale on Friday, November 30th, but the 27" model wouldn't start shipping until December.

topmounter
I thought Tim Cook was supposed to be a supply-chain guru :confused:
Score: 25 Votes (Like | Disagree)

Well to me it means, having the ability and the expectation to deliver an action and failing to do so. So in this case, Apple has the ability to delivery a product and we expect them to meet those expectations, but failed to do so. IE they dropped the ball.

If this is wrong, rather than just saying I am wrong, why not enlighten us all with your knowlege?

Apple unveiled the redesigned iMac at its October 23 media event, announcing that the 21.5-inch models would ship in November with the 27-inch models following in December.


They haven't failed at anything here. Do your reaserch.
Score: 15 Votes (Like | Disagree)

Apple needs to get their **** together!


It's not life or death. People just need to be patient.
Score: 11 Votes (Like | Disagree)

Apple needs to get their **** together!


That is exactly what is happening. Apple is in the process of changing suppliers for all LCD panels. These issues had been resolved previously with Samsung but since they are divesting all business with Samsung they have to work with new suppliers to ramp up to meet needs.

Apple attempted to settle all the issue with Samsung so they could remain partners but that is not going to be possible since Samsung won't agree to a settlement, even when using binding arbitration.

I thought Tim Cook was supposed to be a supply-chain guru :confused:

This is Tim changing suppliers. It would be worse if he was not a guru..
Score: 11 Votes (Like | Disagree)

yocko
Haters; get a vaio. In stock everywhere
Score: 9 Votes (Like | Disagree)
Read All Comments