The Apple fan behind the Every Apple TV ad YouTube channel has created a new channel and blog with the self-explanatory title Every Steve Jobs video, offering a total of around 150 clips of varying lengths. 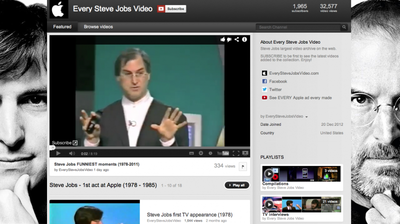 The site's creator told MacRumors that he wanted to get them online in time for Steve Jobs' birthday on February 24.

I'm a long time Apple enthusiast and throughout the years have gathered every single Steve Jobs video I could find … To commemorate Steve Jobs birthday (Feb. 24th) I decided to put all these videos online and make them easily available for all. I believe it's the most complete archive available.


Highlights include Steve's first TV appearance, where he told the crew he was about to throw up from nervousness; the launch of the Macintosh, including the famous 1984 video and Jobs making fun of IBM; and the launch of the Think Different campaign. It also includes some amusing compilations including Steve Jobs' Funniest Moments and Every 'One More Thing' Moment, all 31 of them.
57 comments

jowie
It's still shocking to see how he wastes away towards the end of that video :(
Score: 12 Votes (Like | Disagree)

Wiesenlooser
It's still kinda sad the man is gone. :-(
Score: 7 Votes (Like | Disagree)

Go to 3:20. The audience pan across and you see Sergei the sole person not amused.

You can't miss him. He's dressed as Tom Cruise from Risky Business.

Absolutely. Probably one of the best salesmen of the century. It all came from NeXT. Truth be told, though NeXT computers did some things really well and the OS itself was really great (it's what OSX is based on), the computers were insanely expensive and didn't sell well at all. He was a salesman before, but he really honed those skills with NeXT as, overpriced and outdated as they may be, he HAD to sell them if he was going to continue his career. I sometimes wonder if part of Jobs great success in the end, was in trying new things, breaking all the rules, because he was confident that even if the product turned out to be a flop; he could sell it. As a long long long time Apple fan, I can certainly say that they have released some really crummy stuff that's way behind everyone else. They've also released some pretty great stuff! But the genius is, they sold about the same amount of each!


NeXT Computers weren't outdated. They were more advanced than the competition. Steve learned at NeXT to be less ahead of the competition if you want to win the markets.

People were dealing with Windows 3.11 and NeXTStep 3.3 was out. It was light-years ahead. The hardware on SPARC and HP Gecko were true workstation class hardware carrying on the expensive tradition of hardware for heavy work. The Intel port allowed PCs but only a few vendors paid the $5k certification fees to be on the list.

We were way ahead of everyone else. That was the problem. We were 5 years in many areas or more ahead. No one got it. Steve woke up and slowed down the tech to be either a bit behind, right at or a bit ahead of the competition which allowed people to grasp the future more easily.

People didn't get Display Postscript to Postscript Printing for WYSIWYG in 1992. They didn't get Fax Modems built-in handling all your paperless documentation. They didn't get a lot that people now still don't seem to get as FAX is still highly used but people still buy those crappy HP fax machines.

People truly didn't get Object-Oriented Programming outside the Enterprise until around OS X 10.4. People fought it.

Now people today laugh at those that don't get it.

Change too far ahead is what killed NeXT. That and Bill Gates and Adobe screwing us over, not to mention a certain group inside IBM who didn't like how fast NeXTSTEP ran on IBM hardware and made IBM UNIX look like a child next to it so they ran NeXTSTEP in emulation during demos to the top brass who canned the partnership.

Steve learned a lot about back stabbing from partners and getting the right people on-board in legal, design, manufacturing, channel distribution and more who had all the connections so when the iPod or iPhone arrived all i's were dotted and t's were crossed.
Score: 6 Votes (Like | Disagree)

But this guy really should have followed Bill Gates' lead in terms of trying to better the world. I have a difficult time understanding why people idolize Steve Jobs... could someone please inform me?


Steve Jobs and Bill Gates have done more for the world in their professional careers than they could ever do in their philanthropic careers.
Score: 5 Votes (Like | Disagree)

part of the genius of Jobs wasn't his knowledge of computers, but his lack thereof. He certainly knew a thing or two about technology but Woz (and modern day Apple engineers) know a whole lot more.


Many people would argue that this is the defining difference between Apple and Microsoft and the very reason so many people love Mac and hate Windows. Steve was a visionary not a engineer.
Score: 5 Votes (Like | Disagree)

Thanks for the insight. That definitely makes sense. I'm sure that his stubbornness is ultimately what lead to fantastic products too. It seems like there isn't that level of scrutiny in the past year or so which leads me to believe that he not only had incredibly high standards, but that he also utilized his company's products. I have an rMBP that I'm pretty pleased with and become more pleased with as they work out the glaring nasties, but I could tell that they didn't actually use this machine much before it's release. Jobs-era releases felt a bit more solid, but I could be imagining things.


I might get hung for this; but part of the genius of Jobs wasn't his knowledge of computers, but his lack thereof. He certainly knew a thing or two about technology but Woz (and modern day Apple engineers) know a whole lot more. That lack of in-depth knowledge led him to envision products that were outside the scope of ability. A lot of Apple engineers have mentioned him demanding impossible things, but he somehow drove and led them to do it anyway.

He wasn't a genius because he knew how to build it, he's always had fantastic engineers behind him for that. Really just because he had an idea of what the customer would want (even if it's not what they say they want. If you're an Apple user, surely you've had at least one experience where on-paper, it sounded awful, then you used it and the lightbulb went on and you said 'Oh wait, now it makes sense, this is awesome!"). Apple still has the engineering power that brought us all those great products. But I don't know that it'll ever have the drive or ridiculous scrutiny of a guy like Jobs.
Score: 5 Votes (Like | Disagree)
Read All Comments