Gartner's quarterly Market Share Analysis: Mobile Phones, Worldwide report shows that Samsung and Apple continue to dominate the smartphone market, with more than 52% of the market between them, but that Android's market share grew dramatically year-on-year while iOS saw a decline.

Samsung's Q4 2012 smartphone sales totalled 64.5 million handsets, up 85.3% on the previous year, while Apple's sales reached 43.5 million, a 22.6% increase. However, with featurephones included in the picture, Apple lays in third place behind Samsung and Nokia, with a 9.2% market share. 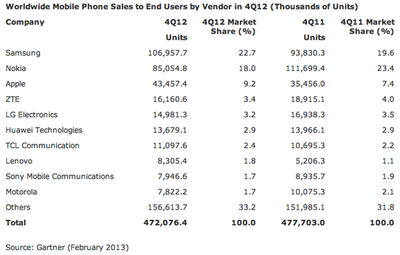 The dominance of Android meant that overall iOS market share fell from 23.6% in Q4 2011 to 20.9% a year later. Android increased its market share in the same period from 51.3% to a commanding 69.7%. The bulk of this growth was at the expense of Symbian and RIM, but some of it was from iOS.

The figures are likely to fuel debate about Apple's pace of innovation, with iOS having changed far less dramatically than Android since the launch of each platform. While the Android platform is split across a range of manufacturers, giving it the benefit of being marketed by multiple companies, Samsung alone is responsible for 42.5% of Android sales.

With Samsung commanding over 42.5 percent of the Android market globally, and the next vendor at just 6 percent share, the Android brand is being overshadowed by Samsung’s brand with the Galaxy name nearly a synonym for Android phones in consumers’ mind share.

The report suggests that Apple's continued success may be more due to the halo effect of the brand, rather than the strength of the iOS platform itself.

The success of Apple and Samsung is based on the strength of their brands as much as their actual products. Their direct competitors, including those with comparable products, struggle to achieve the same brand appreciation among consumers, who, in a tough economic environment, go for cheaper products over brand.

I don't get these type of conversations. It's like talking about how much market share Ferrari has -- it doesn't make sense.


Actually Apple is like Toyota, not exclusive at all. Kids have iPhones. You can buy them at WalMart Target, etc. iPhones are as common as can be. Ferrari is quite exclusive.
Score: 27 Votes (Like | Disagree)

> Comparing *total* iPhone sales to total Android sales:
Comparing iPhone sales to sales of higher-end Android phones that actually compete with iPhone would be relevant. I'll bet the gap in sales would be a lot smaller.

There are lots of cheap Android phones being sold. Heck, you can still buy cheap phones with Android OS 2.3. These phone sales have no bearing on iPhone sales - they are being sold on price and are not a sale taken away from Apple.

There will always be a lot of buyers who buy based on price. Get used to it, people. Gnasher is right. It doesn't mean Apple is failing.

Why? You can buy an iPhone for .99. And it means just what it means, Apple's market share decreased regardless of how many phones they sold.
Score: 10 Votes (Like | Disagree)

I don't get these type of conversations. It's like talking about how much market share Ferrari has -- it doesn't make sense.


Apple is not like Ferrari and shouldnt be comparing them at all. Pumping up the price on a device that could be sold at a 3rd or 1/2 the price is not comparible to Ferrari.
Score: 9 Votes (Like | Disagree)

slffl
The market share is falling not because people are switching from iOS to Android, or choosing Android over iOS for their first phone, it's because people are upgrading their feature phones, walking into their service providers store, and getting what they think is the most bang for the buck which equals a LARGE phone for cheap (they don't care about what OS is on it, or if their money is going to America or Korea).

Then they take it home and all they do is talk and text on it.
Score: 8 Votes (Like | Disagree)

kjs862
I don't get these type of conversations. It's like talking about how much market share Ferrari has -- it doesn't make sense.

I still don't see how android is stepping over IOS? These numbers are based on Apples one phone (iPhone) and all the cheaper phones that android is on.

apple has cheaper phones at every price level starting at free just like android. All running the same ios.

Android and samsung is innovating at full speed and killing apple in those commercials. The only big thing came out of the iphone was a slighter bigger screen last year, their other big feature the map was a disaster and had a negative impact.

Just look at those commercials, when iphone first came it was a showstopper, now the best they can do is touting a "do not disturb" button and how the caller can hear your voice...during a phone call.

Meanwhile samsung is killing it with their commercials touting nfs transfers, stylus doing all sorts of cool stuff, etc...

Apple stopped innovating on their iphone, or rather tried and failed. That's fact.

Many people including myself like iphone because it's simple and works out of box, but that will only carry you so far until a tipping point is reached where the features and innovations on the competitor is just too much to resist.
Score: 6 Votes (Like | Disagree)
Read All Comments