Rabbit: A Video Sharing and Chat Service Launching on the Mac Only 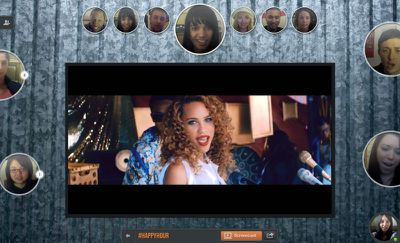 At one point in internet history, desktop instant messaging was likely the fastest growing segment of communication technologies. In 2002, even Apple introduced its own messaging client called iChat that was bundled with OS X. That growth, however, stalled significantly with the adoption of services such as SMS and devices such as the iPhone took hold over the past 5 to 10 years. Apple's own iChat has since evolved into Messages -- primarily, a mobile messaging service.

Today, a startup company called Rabbit is launching a closed beta of their "video chat and content sharing application". But the best way to describe it is a cool and very modern implementation of instant messaging.

The most compelling feature of the app can be distilled down to this: group video conferencing with the ability to screencast music, movies and applications from your Mac.

This means you can watch a movie from a service such as Netflix with your friends in real time. Or you can crop and share a specific part of your web browser or any other Mac app and broadcast it to your friends.

The app is a native Mac client (other platforms to come later), and offers the ability to video chat with an unlimited number of people. People are grouped into Rooms and presented to you in priority based on your own friends, and within each room, individual groups can participate in their own conversations.

Their promo video is clearly aimed at the teen audience, but starts by stylistically showing a user logging in, joining a room, playing/sharing a song, hovering (listening in) on a public conversation, and then joining that conversation. Later, it shows the sharing of apps and video as well as a debate on the relative strength of vampire-love.


Rabbit is launching in a "closed" Beta today. Interested users can sign up on their website, and beta invites will be sent out shortly. Once you are a beta user, you can then freely invite any of your Facebook friends to also become beta users. The service and download are free and requires OS X 10.7 or higher.
[ 103 comments ]

turtlez
Well I am not a teenager so I will give this one a miss ;)
Score: 14 Votes (Like | Disagree)

But the best way to describe it is a cool and very modern implementation of instant messaging.


So they are making an app in a category nobody cares about for a platform that pretty much nobody uses.

I predict runaway success. Not.
Score: 13 Votes (Like | Disagree)

adder7712
Redundant in my eyes.

You already have a lot of more mature services like Facetime, Skype etc. on OS X.
Score: 13 Votes (Like | Disagree)

swingerofbirch
Video chatting has been given every opportunity to take off. People in my social group, at least, don't use it. It's been around for a long, long time, relative to the time other technologies have been available that have really taken off.

I think that the main unsolved problem with video chat is that everyone thought it would be cool to have a virtual presence, but in reality it's uncomfortable. When you sit with people in real life, you don't stare at them. But with video chatting, what other choice do you have but to stare?

Still, I'll try this app out. Video chatting still has a little bit of that Jetsons allure to it after all these years.
Score: 11 Votes (Like | Disagree)

Chastepe
How much money did you (MacRumors) get to promote this? ;)
Score: 10 Votes (Like | Disagree)

TheRealTVGuy
Wow, all of a sudden it sounds like a bunch of old, close-minded Windows users took over Macrumors...

First off, Skype told me I had to pay in order to have group video, then they said it was limited to a certain number of people...

I Love the UI. Instead if the same stale desktop/application feel, you can actually "fly" through the app and the different things going on. That's great! I'm tried of looking at basically fancy looking spreadsheets (iTunes included) at least this has some fluid motion to it.

I can see this being huge for collaboration purposes, especially the college set, where you don't have the money or patience for a "pro" level video conferencing solution.

But the best part is.... It starts out Mac only!! Ha ha Windows suckers! Looks like we get the coolest stuff first once again, and eventually you'll catch up. Who said its a dead platform no one cares about? Oh my! Were we visited by a Windows troll this morning?
Score: 8 Votes (Like | Disagree)
Read All Comments