The reviews for Microsoft's fully featured Windows 8 tablet/laptop combo are out. The Surface Pro firmly slots in between tablets like Apple's iPad and ultra-portable laptops like the MacBook Air, and some have wanted a similar Mac/tablet hybrid.

The overall consensus is that while the Surface Pro does have some good features, it's ultimately brought down by trying to be both a tablet and laptop at the same time. 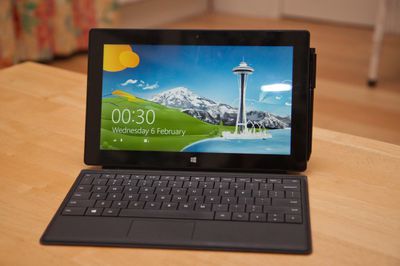 Image via ArsTechnica Review
Here is a collection of some of the early reviews:

- "There's something really weird about running Windows on a tablet, though. I never think about getting a virus on my iPad, or making sure to comply with constant system updates."
- The Surface Pro comes with a Wacom-made pressure-sensitive and capacitive stylus that attaches to the device and is a "useful companion to the device."
- "It's too big, too fat, and too reliant on its power cable to be a competitive tablet, and it's too immutable to do everything a laptop needs to do."

- In battery tests, it lasted under four hours - less than half the stamina of the iPad and three hours less than Surface RT.
- "Of the 64 GB of solid-state storage on the entry-level $899 model, only 30 GB of that is free for the user, according to Microsoft. On the $999 model, 90 GB of the 128 GB total is available for the user."
- "As with the original Surface, the Pro is solidly built, with the same innovative metal kickstand that keeps it upright on a desk or table."

- "Its Ivy Bridge i5 processor, the same you'll find in most ultrabooks, launches apps almost instantly (another big upgrade from Surface RT)."
- "Its screen is too good. Which is to say, its 1080p resolution is so dense on the 10.6-inch screen that desktop programs seem too small, too cramped."

- "As a laptop it is excellent. I was able to do nearly everything I needed to do including the editing of large documents, photo management, blogging, some minor gaming, and plenty of email and web browsing."
- The physical $129 Type Cover and the capacitive $119 Touch Cover are "essential to the Surface Pro experience."
- "There are obviously trade-offs, but the simplicity of form, the excellent design, and the promising OS make the Surface Pro a real treat – and threat to other manufacturers."

- "That keyboard slowed us down and its trackpad continued to frustrate."
- "Photos [from two 720p cameras] are incredibly full of noise and the sensor seems to be completely unable to manage contrast, resulting in images that are either totally washed out or far too dark."
-  "If you're the type who likes to quickly pop on your tablet to check for new email or Facebook messages every few minutes, you may find yourself forced out of that habit here."

bdkennedy1
So it's worse than a tablet, worse than a laptop and more expensive than both with less than half the battery life and no keyboard. Apple has nothing to worry about. Zune.
Score: 105 Votes (Like | Disagree)

Or just buy an 11" Macbook Air. I know it's not a tablet, but it would get the job done better and would be cheaper!
Score: 64 Votes (Like | Disagree)

jacobtaylor1987
First comment from The Verge says it all.

People treat a tablet like an appliance, they want to just be able to pick it up and use it, not fiddle around with settings and updates.

I'm loathe to say it, but for tablets, there needs to be an "It just works" :apple: mentality.
Score: 46 Votes (Like | Disagree)

We've all seen this before... it will die a death much like the Zune.

jmoore5196
I can just see all 192 people who bought the Zune lining up at my nearby Microsoft kiosk to get their hands on this baby!
Score: 31 Votes (Like | Disagree)

campingsk8er
Maybe that's the reason Apple decided to come out with a 128GB version of the iPad. I know you can't compare two different products meant for different things, but iPad 128GB @ $799 vs Microsoft Slate 128GB @ $999. I think we can all agree that the 128GB iPad is a much better deal
Score: 27 Votes (Like | Disagree)
Read All Comments