iPad Mini ship times have dropped to 3-5 days at a number of Apple Online Stores around the world, including the U.S., Canadian, Australia, New Zealand, Mainland China, Hong Kong, and Japanese outlets. This was first noticed by iPhoneinCanada.ca.

The most notable exception to the shipping time improvement is the European stores, which have a 2 week lead time. 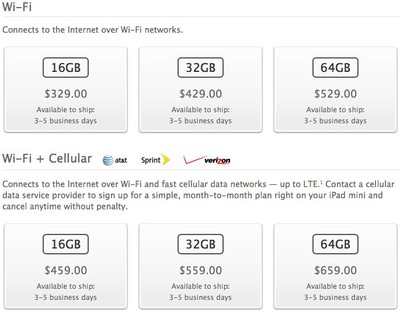 During its first quarter conference call, Apple executives noted that the iPad mini was constrained for the entire holiday quarter. The company believes it can achieve supply/demand balance on the mini by the end of the March quarter.

You're not the only one! I just hope I don't have to wait until October for it.

Same here. In an other rumour it was predicted the updated mini will released March. Please, let it be true!
Score: 2 Votes (Like | Disagree)

Same here. In an other rumour it was predicted the updated mini will released March. Please, let it be true!

It doesn't make sense for Apple to release all of their iOS devices in Sept/Oct. with nothing of significance being released the first half of 2013 so that's why I think there's hope for a March iPad release and possibly the iPhone in June.
Score: 1 Votes (Like | Disagree)

Seems like dropping that child labour didn't have much effect on the waiting times :)

mrsir2009
Seems like dropping the PZ supplier didn't have much effect on the waiting times.
Score: 1 Votes (Like | Disagree)
Read All Comments

Monday July 13, 2020 6:50 am PDT by Joe Rossignol
Earlier this year, Apple agreed to settle a U.S. class action lawsuit that accused the company of "secretly throttling" older iPhone models. Now, eligible iPhone owners are beginning to be notified about their legal rights and options. Under the proposed settlement, Apple will provide a cash payment of approximately $25 to each eligible iPhone owner who submits a claim, with its total payout ...
Read Full Article • 126 comments