Back in August 2011, Apple first passed Exxon Mobil as the most valuable publicly traded company in the world. Both companies have risen in value since, but Apple's recent slide has allowed Exxon Mobil to again regain its position at the top of the corporate world. 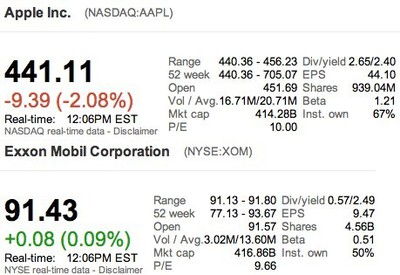 In the 17 months since Apple passed Exxon Mobil, XOM's stock is up some 27%, while AAPL has risen roughly 18%. Today, however, Apple has set a new 52-week low, while Exxon is matching its 52-week high set last September.

When will it end?!

apolloa
Maybe its about time Cook used some of that pile of cash to grow the business, like the stock market and analysts want them to do? Because its doing nothing else for the company.
Score: 17 Votes (Like | Disagree)

Yes the whole industry where the smartest people in the world works are stupid.


Smartest people in the world are on Wall Street? The ones that ran up Apple's stock to $700 and were predicting $1000 and are now selling it in droves. :eek:
Score: 11 Votes (Like | Disagree)


You are right, this entire slide has been nothing but panic selling. Nothing else could have possibly influenced people to want to pay less for Apple stock or value it differently. Everyone just sees people selling and decides to sell! First it was profit taking, then it was capital gains tax and now it is just everyone in panic mode! Are you also in the same camp that has been claiming that we should buy the stock since its considered a steal the entire ride down from $705?