After reporting record-breaking quarterly revenue and profit earlier today, Apple's stock has taken a 10% tumble in after hours trading. Apple posted a $13.1 billion profit for the quarter this year compared to a $13.06 billion profit in the same quarter of last year, yielding flat growth year over year. 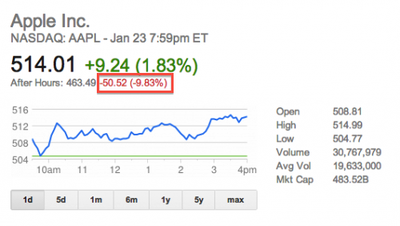 The flat growth, as pointed out by Apple, is largely because manufacturing costs have risen, even as revenue has risen 18%. The New York Times notes that analysts were worried that about Apple's profit margins, even after Apple warned that a significant overhaul of its product line would mean high manufacturing costs in the early lives of the products.

The results arrived with an unusual level of anticipation, even for a company as high-profile as Apple, because of anxiety among some investors about Apple’s ability to sustain its growth and create new hit products. Apple’s stock has lost about a quarter of its value since September, erasing more than $170 billion of its market value.

Business Insider notes that even though Apple's holiday quarter in 2012 had a week less than it did in 2011 that sales growth still wouldn't be at the point that it was.

Apple's 10% stock decline gives it a current market cap of $463.49 billion and a loss of nearly $50 billion in market capitalization from worried investors. Despite analysts' and investors' worries of year-over-year growth, The Wall Street Journal's Tom Gara notes that Apple's losses in market cap today were roughly equal the value of two Research in Motions and two Nokias.

boccabella
It didn't matter what Apple reported today, they could have announced a cure for cancer and Wall Street would have sold off the stock.
Score: 32 Votes (Like | Disagree)

parapup
Apple is becoming Microsoft - or at least that's the fear. They sell a ton of their cash cow products and make good money - but that's just resting on their laurels. Where the hell is any innovation and disruption? People respect Apple for exactly that. Making profits on cash cows - that spot is for Microsoft.

The thing is they will sell some more iPads and iPhones but then when that's saturated they will badly need disruptive new product or at least leaps and bounds improvements to existing ones. And there are no winds of that for past couple years and counting.
Score: 29 Votes (Like | Disagree)

iPhone sales still grew 39% yoy. iPad sales grew 49% yoy. Macs down 1.1m (obviously since they stopped selling iMacs as soon as they announced new iMacs, and even when the new iMacs became available, there wasn't enough to go around, and with no new Mac Pro, they probably sold very little desktops).
They beat their guidance and beat analyst estimates. Revenue was a slight miss (you can blame iMacs for this). Next quarter will be a monster quarter for macs. Mac mini will also show its true sales potential.

Also, the company is trading 3.5X cash and about 8X earnings. Fundamentals will kick in eventually. If anyone had the cash, they would take over this company just based on those numbers.

Will iPad sales keep going up? Guaranteed! iPad mini at $329 will maintain majority marketshare this year. Next year iPad Mini 2 will be $329, and last gen iPad mini will probably be sold for $249, breaking through yet another price barrier, giving android no chance to compete above $200.

Mac sales will never go down again. Mac Pro will be updated this year as promised. MBA with Retina will be a hit. And iMacs wont go on a 3 month hiatus on the next update since it will retain the same design. Oh, and Windows 8 is loved by everyone on Earth, NOT!

Ok, just based off of all the things I have listed, there is nothing to worry about as an investor, except your own patience, and what I have listed alone guarantees Apple huge growth for years to come!!!

BUT, how about NEEEWWW products. There are so many product categories Apple is yet the dominate.
iTV - This could be big. Hey even if it is not, it will still sell 10m+ every year just because of how well it will integrate with all of your other Apple devices.
iWatch - This could be huge. At the right price point, we can see millions of people wearing iWatches if Apple comes out with something cool.
Arm Based MBA - A $500 MBA based off of A7 or A8 processor bury Microsoft.
iGlasses - Wearable smart glasses will definitely be a huge hit in the future as we seen a preview of what it is from Google.

Also, APPL might have a stock split this year, to get into the Dow Jones. Than the law of large numbers wont apply to the share price anymore, and could easily boost to stock to trade 15-20X share like it should, considering that this company is still a GROWTH company.

I am writing all of this because I am fed up with the stock manipulation of Apple. If the price of the stock goes any lower, Apple should just go private and buy all of its shares. If Apple as a company was torn apart right now, their cash intellectual property, retail stores, and inventory would be worth more than its market cap. Apple investors, stop listening to the media who don't own the stock, and so called analyst who know nothing about Apple.

Apple maps fiasco? Hmm. If you don't like Apple maps, download one of many free or payed GPS applications out there, and if you cant do that good luck with Android!

Scratch gate? Since when is any electronic scratch proof?

Boring OS? Just row of iCons? Than how come Windows was so successful for decades, and now they are getting bashed for changing their UI now?

pipa
This stock is a steal at this price. If/when apple attacks the TV market it is going to take that company into another stratosphere. Just imagine selling millions if tv's at $2,000 to $3,000 a set. I know ill be a day one buyer. And trust me when Steve was alive he said that he cracked the tv and knows what we need. Just remember in 07 when he cracked the cell phone what happened. With apples ecosystem in place and icloud a TV is the last piece of the puzzle and the possibilities of what can be done is incredible. FaceTime, iMessage,apps made for the set, safari. It's going to be amazing.
Score: 17 Votes (Like | Disagree)

no need to worry, it will be back up tomorrow around 10 or 1am

Apple stock price is great, but I knew it would never get to 1000$ Why people even a acknowledge analysts is beyond me.


Analysts are typically wrong except when, in cases like these, they themselves affect the price to match the prediction. It's stupid.
Score: 15 Votes (Like | Disagree)
Read All Comments