Research firm Gartner today released its preliminary personal computer shipment data for the fourth quarter of 2012, showing a mixed market for manufacturers. Overall, Gartner saw a 2.1% year-over-year decline in PC sales in the United States, compared to a 4.9% decline on a global basis.

Gartner's Preliminary U.S. PC Vendor Unit Shipment Estimates for 4Q12 (Thousands of Units)
In the United States, Apple maintained its third-place ranking with 12.3% of the market on a unit sales increase of 5.4% over the year-ago quarter. Apple's growth was outpaced by leader HP at 12.6% and fourth-place Lenovo at 9.7%, but Lenovo remains well behind Apple at 8.4% of the U.S. market. Apple and the other gainers were, however, more than offset by steep losses at Dell and Acer, leading to overall contraction of the PC market in the U.S.

Apple's U.S. Market Share Trend: 1Q06-4Q12 (Gartner)
As usual, Gartner did not cover Apple's worldwide market share for the quarter, as the company does not rank among the top five vendors on a worldwide basis.

IDC has also released its estimates of PC sales for the quarter, offering an even bleaker view of the market with its calculations of 6.4% contraction in the global market and a 4.5% decline in the United States. Apple in particular took a hit in IDC's estimates relative to Gartner's numbers, with IDC projecting that Apple's sales actually shrank by 0.2% year-over-year. Still, given the overall market decline in the U.S., IDC saw Apple's share of the market rise from 10.9% to 11.4%.

how much money do they make on them? None?


Wow, this thread opens on quick the butthurt already. Are you really surprised, what with enterprise level contracts for notebooks and desktops that HP and Dell would outsell Apple, when they've been at #1 and #2 for years now ? :rolleyes:

As for the actual numbers, I'm surprised the current tablet craze didn't eat more into this segment. The market is mature and lets face, as technology advances, the actual niches that do require more and more computing power are getting smaller and rarer. Most people have attained a level of computing power to fill their needs quite a while ago, and upgrades are mostly done to replace faulty old hardware or out of a "want" consumerism basis.
Score: 14 Votes (Like | Disagree)

I think you must have been actively looking for 'butthurt' to comment on,

No sorry, trying to dismiss market share numbers with "profit" is the argument of someone looking to justify Apple's position in some way. It's not really the topic and no one rational would care enough that Apple is #3 to try and attack HP and Dell's #1 spot.

No one but shareholders care about profits. Profits are essentially the dollars a company managed to charge extra for to buyers and stuff their money with. If you ask me, the less profits the better I'm off.
Score: 10 Votes (Like | Disagree)

I didn't realize HP was doing so well... I'm in a room full of laptops right now and glancing around me I can make out...

What do the numbers look like when you just look at laptops?

Edit: I'm in a university engineering classroom... my understanding was many engineering students use Windows...


If you're in a university the chances are most of the computers around you will be macs. 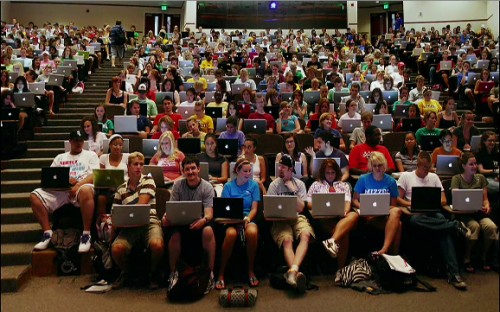 (Funny side-note: We had a linux obsessed lecturer who spent 2 hours shouting at everyone in the room for being on a Mac or Windows machine, and he stood there with his laptop giving a presentation. Literally as he said "Those crappy closed source operating systems are so unreliable" his laptop locked up. Needless to say the lecture ended at that point. :D)
Score: 10 Votes (Like | Disagree)

I think you must have been actively looking for 'butthurt' to comment on, because there didn't actually seem to be any in that post.


I disagree. I think it's pretty obvious the tone of the post. Not to mention - what does profit margin have to do with the topic. Oh I know it's related. But the manner in which the OP commented - it wasn't a discussion point. It was what everyone knows it was. A knock on HP and Dell for not being Apple.
Score: 9 Votes (Like | Disagree)

Wow, this thread opens on quick the butthurt already. Are you really surprised, what with enterprise level contracts for notebooks and desktops that HP and Dell would outsell Apple, when they've been at #1 and #2 for years now ? :rolleyes:

As for the actual numbers, I'm surprised the current tablet craze didn't eat more into this segment. The market is mature and lets face, as technology advances, the actual niches that do require more and more computing power are getting smaller and rarer. Most people have attained a level of computing power to fill their needs quite a while ago, and upgrades are mostly done to replace faulty old hardware or out of a "want" consumerism basis.


I think you must have been actively looking for 'butthurt' to comment on, because there didn't actually seem to be any in that post. Dell and HP, in fact, make virtually nothing from their PC sales because they got involved in the PC price wars, where vendors competed for market share based solely on price. In the beginning that competition was good, but eventually the vendors had to cut into quality to keep pricing lower, and the market *still* hasn't really recovered from that.

The fact is that both Dell and HP outsell Apple (in both units and revenue), but they're getting *murdered* by the unbelievably low margins on the typical systems they sell. Apple avoided the race to no profits that the rest of the PC industry 'competed' in over the last two decades or so. The lowest-end systems sold by Apple are mid-range system by the standards of most OEMs, including Dell and HP, and carry similar profit margins to those systems. Apple doesn't *do* the 'low-end' where there are no profit margins though.

In the mid-range and upper end, there is more room for both quality and profits because not so many corners need to be cut to squeeze prices down. The result of cutting corners and 'going cheap' in order to compete solely on price has resulted in *most* Windows PC vendors gaining a reputation for poor quality over the years, at the very least in their 'consumer' lines.

Profitability in the Windows PC market has been so poor that HP recently looked at unloading their PC division because it was so unprofitable. Dell has had financial issues related to poor profitability in the recent past as well, though I don't recall seeing anything in the past few years, so they may have gotten things under control.

Gotta stick to the U.S. numbers because they fall off when you consider worldwide numbers, which really show how successful Lenovo and ASUS have been.


That's true. I remember when ASUS were just 'the guys who assemble other people's gear'. They've really made a move on the market since then.

malman89
Gotta stick to the U.S. numbers because they fall off when you consider worldwide numbers, which really show how successful Lenovo and ASUS have been.