iOS 6 Adoption Uptick Due to iPhone 5 Release in China, Not Google Maps?

Ad network and analytics firm Chitika claims it has seen no significant increase in iOS 6 adoption in the U.S. and Canada. A company analyst believes the MoPub data (which was international, rather than domestic) we wrote about earlier today was affected by the recent launch of the iPhone 5 in China, rather than the release of Google Maps.

This past weekend, Apple issued a press release bragging that it had sold more than two million iPhone 5 units in China over the first three days of availability. 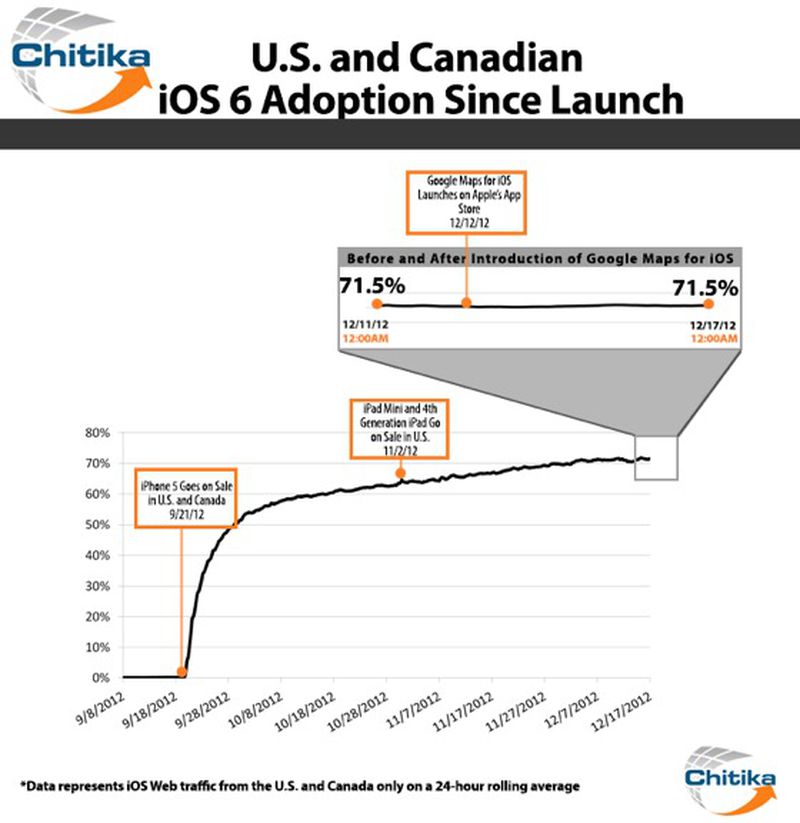 In the chart above -- which only looks at data from the U.S. and Canada, rather than the international data that MoPub examined -- the iOS 6 adoption slope following the release of Google Maps for iOS remains practically unchanged from before the release, suggesting a sea change in iOS 6 adoption rates resulting from Google Maps release is inaccurate.

On Monday, Google reported that Google Maps for iOS had been downloaded more than 10 million times.

rmwebs
Dear god Macrumors either get on the bandwagon or dont.

Here's a thought...maybe it's all three.

Or maybe the Mayans wanted to try it out before they kill us :cool:
Score: 22 Votes (Like | Disagree)

I know of 2 people including CmdrThor and wife that delayed updating to iOS 6 due to the maps "issue".
Score: 22 Votes (Like | Disagree)

SnowLeopard2008
Why would Google Maps drive adoption iOS 6 adoption? It's a cluttered mess of a GUI on Android. They might have better map data than Apple but it's about damn time I, the end user, start seeing it instead of just reading about it. Show, not tell. Apple Maps has a far superior and easier to use GUI and has a significantly larger locations database than Google. Although it falls short in some areas, no GPS system is "perfect". Let's not forget that some people drove into oceans and off cliffs using the same map data provider that Google (and Apple) uses.
Score: 16 Votes (Like | Disagree)

who cares? the adoption rate will be down to zero by tmrw anyway

RobHague
Google maps wasn't that important :confused: it seems an exaggeration to me that anyone could hold off just based on that. If it was deadly vital you could just go to the mobile site.

I have had zero issues with Apple Maps anyway, I downloaded the new Google Maps but its in a folder for emergencies with other apps like Waze. I was in London a few days ago and decided to give Google Maps a spin when I got lost, and it was giving me confusing directions. Switched to Apple Maps and it was much clearer. How is that for irony?
Score: 15 Votes (Like | Disagree)

Friday May 22, 2020 4:01 am PDT by Tim Hardwick
Former Apple executive and iOS chief Scott Forstall made a rare public appearance this week at Code.org's virtual Code Break event, and in between classes, Forstall shared the intriguing story of how he was hired by Steve Jobs. Forstall revealed that he had been considering working at Microsoft when he went to interview at NexT, the company started by Jobs after he had left Apple. Forstall...
Read Full Article • 141 comments